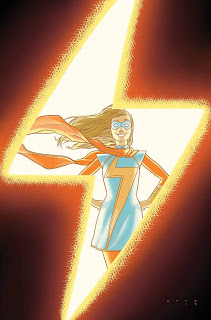 So this week Ms Marvel ended. It's not such a big deal: pretty much every Marvel comic book is currently about to end, has already ended, or has relaunched with a new volume and new issue #1. I have no doubt within a few months Kamala Khan will be back for more adventures.

Issue #19 is a pitch-perfect conclusion to this first volume. The world is ending. Don't ask me why or how, I'm not reading Secret Wars and I didn't read much of the lead-up to it. At any rate G. Willow Wilson has written this final story arc on Ms Marvel in such a wonderful fashion that you really don't need to know the details. The world is ending, and as a low-level and highly local superhero Kamala doesn't have any way to stop it. So this is basically a few final minutes in a school gymnasium with her friends and family as they quietly wait for the inevitable. It's sweet, regularly funny, and highly melancholic. The moments of character are perfectly observed. The plot developments are unexpected and yet each makes perfect sense. When the series does come back, and it had damn well come back with Wilson still writing it, it's in a very strong place to begin.

Adrian Alphona's pencilled artwork is wholly unlike any other superhero book on the market. It has a soft, likeable quality to it that emphasises emotion over realism. It's enhanced tremendously by Ian Herring's delicate colours. Altogether it's just a wonderful package. I have loved this whole series. I am desperately keen for it to come back, hopefully sooner rather than later - who knows with the haphazard release schedule that Secret Wars is following. (5/5)

Under the cut: reviews of Batman & Robin Eternal, Chewbacca and The Fuse.

DC's newest weekly series continues. Three former Robins and Bluebird have all been targeted for assassination, upon the orders of the mysterious "Mother". They're getting some help from a young woman named Cassandra Cain, but so far the only link back to this new villain is Dick Grayson's original encounter with the Scarecrow. This is a very fast read, stringing together action scenes and brief conversations to give the issue a great sense of momentum. Tim Seeley's script is peppered with some great moments of humour, while Paul Pelletier and Tony Kordos provide great superhero-style artwork. We're in the early days, but if you want to jump on I'd do so now. (4/5)

On an Outer Rim world, a girl named Zarro is on the run from a local gangster who has enslaved her father in the mines. She's out of options and no one will help - until she meets a strange Wookiee in a tavern. Marvel's rolling group of Star Wars miniseries is paying off exceptional dividends. I didn't read their Princess Leia book, but Lando was a great heist-oriented romp, and Chewbacca is shaping up to be just as entertaining. Gerry Duggan captures his character brilliantly, and Phil Noto's art ensures that his incomprehensible roars and growls actually come across as meaning something. If you're not a Star Wars fan then you almost certainly stopped reading three sentences ago. If you are, this is an excellent first issue starring a fan-favourite character. (4/5)

"Perihelion" reach its third part. A station-wide party, a political rally, an elderly cat burglar, a dying mobster, and a serial killer all appear to collide and intertwine over the course of one day. It's a really solid issue, with Johnston juggling multiple storylines in a manner that's let to fully unfold and make sense, but which remains remarkably entertaining all the same. Justin Greenwood's artwork is wonderfully exaggerated, giving the book a lot of emotion and energy. It's just another issue to remind me that this is one of the very best comic books in the USA right now. (4/5)
Posted by Grant at 7:18 AM