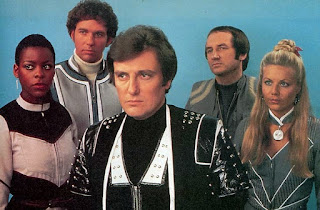 Abandoning his now-compromised base on Xenon, Avon (Paul Darrow) leads his team to the frontier world of Gauda Prime for a long-delayed reunion with Roj Blake (Gareth Thomas).

"Blake", written by series script editor Chris Boucher, is indeed the final-ever episode of Blake's 7. It has gone down as one of the most famous - some would say notorious - series finales in the history of British television. Those who have seen it never forget it. Upon its original Christmas week broadcast it led to the BBC's main switchboard being jammed with angry calls, and furiously written letters telling Boucher that he was 'the man who ruined Christmas'. If you've been reading along with these reviews, but have never actually seen this episode and do not know what happens in it, I honestly recommend you stop reading now and go watch the episode for yourself. It really is worth seeing cold at least once before having its storyline spoiled for you.

What an outstanding hour of television. It's not just its ending - which we will get to in a moment - it has a strong, intelligent storyline, great backstory and background detail, and production values that feel like a genuine leap forward from the rest of the series. It feels, somewhat ironically since it's the last episode, like a breath of fresh air. Season 4 has stumbled quite a bit, only really hitting its stride in its second half, and now that it finally nails an updated look and feel, it all ends.

The episode has an extraordinary apocalyptic drive to it. It begins with Xenon Base being demolished with explosives - Avon not trusting that Zukan didn't reveal its location to Servalan. Within minutes Scorpio is under attack from a blockade of gunrunners and crashes into the surface of Gauda Prime. By the episode's end... no really, we will get to that. Just not yet.

Boucher doesn't waste time in re-introducing Roj Blake, now a scarred, unshaven bounty hunter helping to clean up Gauda Prime's extensive array of runaway criminals. I can't remember the last time a planet got so much development and attention. The additional detail works wonders, and it's a clever concept: a peaceful agricultural colony, it turned lawless when mining interests forced all laws to be declared null and void - including laws preventing those interests from pushing the farmers off their land and mining the minerals underneath. Now that the planet is effectively mined out, and its people want to be admitted back into the Federation, bounty hunters have moved in to clean up the criminals who have been running riot for a generation. To be honest you could set an entire science fiction series of its own just inside that set-up, and Boucher's developed it for just one episode.

It's mostly a very good episode for the regulars. Tarrant gets to heroically crash Scorpio onto the planet, and share some excellent scenes with Blake when the latter comes to retrieve him from the wreckage. Vila has a beautiful moment asking Avon where Tarrant is when they reunite on Gauda Prime's surface - you can see the mistrust from "Orbit" is still there. Soolin finally gets some last-minute back story (it turns out Gauda Prime is her home planet). It's only really Dayna who misses out, which is a shame given it's her final episode as much as anybody else's.

Gareth Thomas does a great job of playing this older, more hardened Blake. Boucher's script actually keeps its cards well hidden in regards to Blake's new career - it's only minutes before the end that we discover it's all a ruse: Blake is gathering up runaway criminals one by one to find and turn enemies of the Federation. He's secretly building an army right under the Federation's nose. It's a great twist, and it makes a lot of sense too. Blake's only problem is that he's getting too passionate about his rebellion to notice any of the details. There's a Federation officer right under his nose and he doesn't even realise until it's too late.

In the end "Blake" is a tragedy, and I mean that in a classical sort of Shakespearean sense. The episode's conclusion is inevitable because it is forced by the flaws of two men: both friends, both irreparably changed by their experience over the course of the series. By the end of Season 2 we had already seen Blake transform from an idealist to a zealot, and this episode makes it clear he has not strayed from that path. He is too trusting of Avon to imagine anything can possibly go wrong when they meet again. On the other hand we've seen Avon transform from a self-interested cynic to a paranoid near-sociopath. The last ounce of trust he had in other people died with Anna Grant in "Rumours of Death", and he's since murdered anybody in his way without a moment's hesitation. Throwing his open trust into a confrontation with Avon's paranoia is Blake's greatest, and sadly final, mistake.

They meet. Neither understands each other any more. In a moment of panic Avon opens fire and shoots Blake in the stomach. It's an accident so awful that it takes two more shots to the stomach for either man to properly understand what's just happened. Plus there's the blood. This isn't the series' standard anodyne treatment of violence and killing. Blake doesn't clutch his stomach and fall to the floor. For the first time there's blood. Fountains of it. By the third shot Blake's shirt is positively soaked in it. The amount of blood was actually accidental: director Mary Ridge wanted some blood, then Gareth Thomas spoke to the effects workers and asked for a bit more - he didn't want anybody in the audience thinking there was the slightest chance he'd be coming back again - and they in turn perhaps over-dialled the quantity a little. It works brilliantly though, because if the emotional horror of Avon's acts don't hit the audience the visceral shock of all that blood certainly will.

Alarms are sounding. Federation troopers storm the base. One by one the regular cast are shot and killed: first Dayna, then Vila, Soolin and finally Tarrant. As the situation grows worse, additional alarms begin sounding. By the time Avon's the only rebel left standing, surrounded by bodies, it's a cacophony of noise. Then, suddenly the alarms stop. In a series of perfectly timed cuts, we move from long shot to extreme close-up as Avon steps over Blake's corpse, raises his rifle, and smiles. There's a cut to black, and instead of the theme music we simply hear a flurry of gunshots. It is hands-down the single-best directed scene in the whole series. It all happens so fast as well. The first time around it seems near-unimaginable.

Of course it's nothing of the sort. Blake's 7 is a series about losing battles. From the get-go Blake and Avon always seem to lose. They attempt to recruit a new ally, and that ally either dies or betrays them. They broke into Central Control on Earth, only find it empty - and they lost Gan in the process. Avon went to find Blake on Terminal, and as a result the Liberator was destroyed and Cally died. Even their victories seemed qualified: Blake found Star One, but then had to defend the Federation against an intergalactic attack. Now they find themselves on the cusp of their greatest-ever victory - uniting Blake's criminal army with Avon's interplanetary alliance - and it all goes horribly, even predictably, wrong.

The hilarious part of all of this is that "Blake" was never intended as a series finale. Boucher and producer Vere Lorrimer figured that any characters whose actors wished to return would have been stunned but not killed by the Federation troopers, and any who wished to depart would have their characters be killed. Conversations were already being had about giving the series a soft reboot in Season 5 along the lines of the episode "Gold" - a heist-based drama about a group of space-faring criminals. In the end, BBC management figured it was time to call it a day.

This may be the end of Blake's 7, but it goes out in a blaze of glory. This is the finest episode the series ever produced: perfectly written, very well acted and tremendously well directed by Mary Ridge. Once you've seen it, you don't forget it. Season 4 ends with eight good episodes out of 13 and a quality ratio of 62 per cent - unexpectedly the exact same quality ratio as every other season. There's consistency for you.
Posted by Grant at 7:00 AM