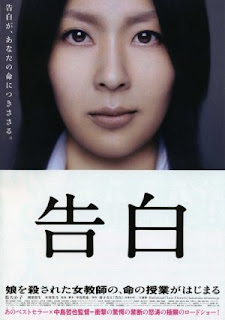 At the end of term, a junior high school teacher assembles her class together. She informs them that her four year-old daughter was found dead in the school swimming pool, and that she knows that it was not an accidental death but murder. Furthermore, she knows that two of her students are the murderers. The rest of the film follows the class as they move into a new year, and gradually self-destruct from the after-shocks of that revelation.

Confessions is a tightly wound Japanese thriller. It is stylised to the point of abstraction. It is a bleak and confrontational story, switching its focus from one character to the next to reveal their backstories, inner conflicts and motivations. It's not a "whodunnit" mystery - you know who the murderers are by the end of the first scene - but rather a "whydunnit". Some of the motivations aren't clear until the final 15 minutes.

It's worth warning prospective viewers that this is an often-times challenging movie. Nothing happy happens for the entire two hours. It is a film about murder and slow-boiling revenge, with more than one shocking moment to startle the viewer out of his or her complacency. I adored it, but I can imagine a lot of viewers resenting the fact that they ever saw it at all.

The Japanese film industry has always been a fertile environment for filmmakers to tell disturbing stories. It is the industry that fostered the talents of Takeshi Kitano, Kinji Fukasaku and particularly Takashi Miike, whose harrowing thriller Audition came to mind more than once while watching Confessions. I've observed in the past that Japanese cinema seemed to play out the cultural trauma of 1995 onscreen: that year struck the country with both a major terrorist attack on the Tokyo subway and one of the deadliest earthquakes in history. With the 2011 tsunami and nuclear meltdown in Fukashima I suspect this stark, depressing line in trauma filmmaking will continue for some time.

The performances in this film are uniformly brilliant. Takako Matsu plays Yuko Moriguchi, the school teacher who instigates a terrible revenge at the film's opening. For much of the film she seems as inhuman as the students she chooses to punish, but then scenes towards the film's climax provide her with some much-needed depth and humanity. The film does this a lot: you start off questioning a character's depth or motivations, and subsequent scenes address those concerns perfectly.

The two young murderers are played by Yukito Nishii and Kaoru Fujiwara. Fujiwara plays the bullied, struggling student Naoki, who is easily dragged into the scheme and suffers a near total breakdown as the film goes on. More interesting is Nishii as Shuya, a child prodigy and budding sociopath, who demonstrates more and more nuance and depth as the film goes on. Most engaging of all is Ai Hashimoto as Mizuki, a troubled schoolgirl who grows more and more attracted to Shuya even as his crimes become clear. All three are unsettling characters, and they're unsettling because they're so completely believable.

This is not a film for everyone, but for the viewers who do like dark, provocative, stylish filmmaking I'd go so far as to call it a must-see. This is one of the best films I have seen this year.
Posted by Grant at 9:06 AM