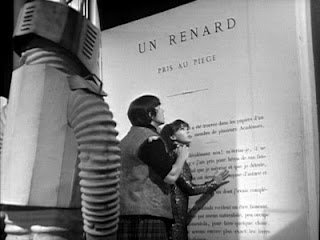 Who50 counts down to the 50th anniversary of Doctor Who by reviewing my favourite episodes and serials over the history of the programme, counting down from #50 to #1. Today, #8: "The Mind Robber", a five-part 1968 serial written by Peter Ling and Derrick Sherwin and directed by David Maloney.

When I start rattling off the reasons why I think Doctor Who is the greatest TV series of all time, pretty much my top reason is the fact that - due to the versatility of the format - you can tell almost any kind of story with it. You can tell science fiction, supernatural horror ("Hide"), murder mysteries ("Black Orchid"), comedic romps ("Love and Monsters"), political satire ("The Sunmakers"), historical epics ("Marco Polo"), Shakespearean drama ("The Crusades") and even Arthurian fantasy ("Battlefield"), and the format simply will not break.

I think that, with the possible exception of the aforementioned "Love and Monsters", this idea is best exemplified by "The Mind Robber", a five-part foray into fantasy, folklore and above all bug-eyed surreality. This is Doctor Who at its most bizarre, but also at its most inventive. Its strong sense of play is what makes it, for me, one of the 10 best Doctor Who stories of all time.

The story begins with the TARDIS about to get smothered in molten lava, and while attempting an emergency escape the Doctor ports the TARDIS out of time and space entirely. The Doctor, Jamie and Zoe find themselves lost in a white void - only they're not alone, and by the end of the first episode the TARDIS is blown into pieces.

It's a serial constructed out of highly difficult circumstances. The sixth series of Doctor Who suffered from late and cancelled scripts, which led to this four-part serial suddenly becoming a five-parter, and producer Derrick Sherwin called in to contribute the particularly stark and unusual first episode. I think it's this first episode that makes the whole story work as well as it does, since it strips away everything - set, characters, TARDIS - to such a degree that anything could be reasonably expected the following week. Jamie's change of appearance, which fits the tone of the serial perfectly, only occurred because Fraser Hines was off sick for a week and couldn't perform (the role is played admirably by Hamish Wilson).

Every creative choice made in this serial is a clever one. Every performance fits the overall sense of the piece seamlessly. This is not only one of Doctor Who's most unusual and striking adventures, it's also one of the most slickly produced. Like all of these top 10 stories, I never get bored of watching it. It's brilliantly produced television, above all else, and still stands up wonderfully despite all of the decades that have passed.
Posted by Grant at 9:23 AM