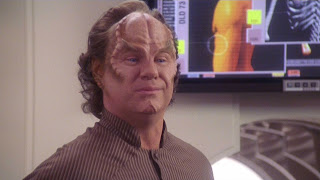 Generally speaking, the second year of a Star Trek series is where the kinks and problems of the first year get shaken out or improved, and the full potential of the series becomes clear. It happened to The Next Generation, and again to Deep Space Nine and Voyager. I was hoping for something similar with Enterprise, since its first season - while enjoyable - did show quite a bit of room for improvement.

Sadly the bottom line is that Season 2 is not as accomplished as Season 1. It's more uneven, and while it does reach the same highs from time to time, those highs simply don't seem to come quite as often as they did in the first year. To be fair I'm not sure it hit the same lows either (with one exception), but as a baseline it simply didn't feel as fresh and enthusiastic. I wonder how much of that is in the show and how much is just my increased familiarity with it: Season 1's greatest appeal was that it was a whole series of Star Trek I had never watched, whereas with Season 2 I know the characters well enough to know when they're being used well, or badly.

There are some clear problems. The series launched with an ill-advised time-travelling 'cold war' story arc, and it's begun to hang like a millstone around the series' neck. It comes up three times this year, which given there were 26 episodes doesn't really seem like enough to warrant its existence. At the same time the writing team has opened that door, and the longer it remains open the more obvious it becomes that they're reluctant to go through it. I think a season premiere that died off the arc for good would have helped immeasurably.

There are also still problems with some of the characters. No disrespect to Dominic Keating's performance, but Lt Malcolm Reed is possibly the blandest and least engaging lead character in Star Trek history. Anthony Montgomery also suffers for the most part with an underwritten character.

There's also the problem of "Vanishing Point", which just might be one of the worst episodes of Star Trek ever made, let alone a bad episode of Enterprise.

When the cast and crew get a strong script, however, it's fantastic. I've highlighted my five favourite episodes below, and the one thing that unites them all is a strong, self-contained script with solid science fiction ideas and some good moments of drama and action.