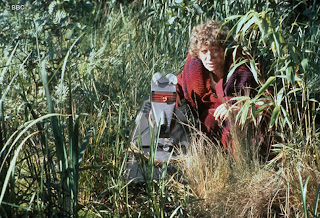 Who50 counts down to the 50th anniversary of Doctor Who by reviewing my favourite episodes and serials over the history of the programme, counting down from #50 to #1. Today, #9: "Full Circle", a four-part 1980 serial written by Andrew Smith and directed by Peter Grimwade.

Of all the stories listed in my Top 50 of Doctor Who, it's "Full Circle" that's probably my sentimental favourite. It's not the best serial of all time - as you can see, even I think there are at least eight other stories that are better. It's also not really one that rates exceptionally highly in people's minds. You rarely hear fans discuss it that often, unless it's to bemoan Adric, probably the most contentious companion in the series' history and who is introduced here. When released onto VHS or DVD, it's always been as the first part of "The E-Space Trilogy" - as if it doesn't really deserve the spotlight on its own but instead has to share the attention with another two stories. And the thing is, it deserves a spotlight. It deserves closer attention and better appreciation, because this is a stunning work of science fiction with great performances, solid direction and a strong script (made all the stronger when you learn it's one of two serials in Doctor Who history to be written by a non-professional fan making their TV writing debut).

This might run a little longer than the usual Who50 entry, but then it deserves it, because this is "Full Circle", the ninth-greatest Doctor Who story ever made.

1980 was a significant year for Doctor Who for many reasons. Superficially you might think this was due to the impending departure of Tom Baker after seven years in the role of the Doctor, but more importantly for the series' future was the appointment of John Nathan-Turner as series producer. He had previously worked as production unit manager, a BBC job that essentially entailed managing the budget for a suite of different programs at the same time: Doctor Who featured a space-age staircase in one episode? Why not re-use that staircase as set dressing for Top of the Pops? Nathan-Turner brought his budget savvy to Doctor Who in some remarkable ways, for example by replacing composer Dudley Simpson with individual members of the BBC Radiophonic Workshop he not only managed to revise the sound of the series for the 1980s but also saved on the budget by not paying for Simpson's session musicians. The money saved on that could instead pay for better visual effects. Through clever budgeting, strategic hirings and firings and sheer enthusiasm, John Nathan-Turner pushed Doctor Who through its most significant aesthetic shift since the introduction of colour in 1970. Sure, by 2010s standards it still looks quite hokey and dated, but back in 1980 the difference was striking.

At the same time a new script editor, Christopher Bidmead, pushed an agenda for more serious stories with good science fiction concepts and less of the overt humour that had typified the previous two years of the series.To be fair Bidmead's agenda for better science fiction doesn't actually pay significant dividends, but in the case of "Full Circle" it pays off in spades. The story features a planet - Alzarius - with a rapidly accelerated evolution. Its central conceit - a community of colonists defending themselves from swamp-based monsters learn they are themselves evolved from the same swamp monsters - is brilliant.

The marshmen are a masterpiece of design, and their slow, threatening rise from the swamps of Alzarius rivals many of the more iconic moments of the Pertwee and Baker eras. I was six years old when I first saw "Full Circle", and the imagery stuck with me just as effectively as giant spider, enormous maggots or Daleks. What makes the marshmen so interesting to me now how they're not monsters at all, but rather a completely believable species of semi-intelligent beings. Sure they're scary, but they're sympathetic at the same time. It's a hell of tightrope to walk, but writer Andrew Smith and director Peter Grimwade manage it.

Tom Baker and Lalla Ward are in top form here, with Baker continuing his more withdrawn, moody portrayal of the Doctor that runs throughout this season. Lest you think the humour is completely gone, watch for a fantastic bit of detail Baker performs on first entering the starliner. He wanders around the entrance hall calling out if anyone is there. He passes a table with a knife and a melon. He pockets the knife without really thinking about it, wanders away, wanders back, picks up the melon, looks at its size, looks at the size of his coat pocket, and absent-mindedly puts the melon back on the table.

As I mentioned earlier, the serial is probably best remembered for introducing Adric, a teenage boy and child prodigy who continues to be one of the least appreciated companions of all time. It's not helped by Matthew Waterhouse's experience - he's clearly very young and inexperienced - but it's still a character I've always liked. As a dark-haired boy who was good at maths and kind of annoying, I related rather well to him. He works brilliantly opposite Tom Baker, forming a sort of Fagin/Artful Dodger relationship that - if it continued - would probably have made him better remembered. Sadly Baker departs in a few serials' time, and Adric simply doesn't work in the crowded TARDIS of the Peter Davison era.

"Full Circle" strikes me as one of the best Doctor Who stories because it exemplifies everything that I want in Doctor Who: an amusing yet passionate Doctor, smart and brave companions, a cool scary monster, and some great science fiction. The first Doctor Who story I remember ever watching is "Destiny of the Daleks". The first story I remember watching as a passionate fan and viewer of the series remains "Full Circle".
Posted by Grant at 11:20 AM