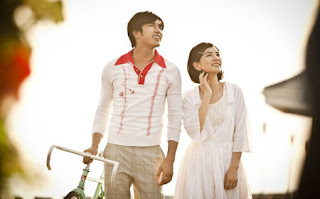 Teenage tomboy Ah Dan (Ella Chen) is an aggressive defender of young women throughout her rural town, beating senseless any man or boy she sees bullying or disrespecting girls. When Asia's most popular heartthrob chooses to shoot his latest romantic film at Dan's school, a string of mishaps sees Dan accidentally injuring the film's female lead and forced to take her place.

Bad Girls is a 2012 Taiwanese teen romantic comedy directed by Weng Jing-ting and starring Ella Chen and Mike He. As far as I'm aware it isn't available on home video in Australia - I reviewed it via a Hong Kong DVD.

Oh good grief this is a terrible movie, yet for some reason I couldn't stop watching it and enjoyed it immensely all the same. There are bits of the film that do genuinely work, and there are other bits that fail so profoundly that they make the jump from bad to excruciatingly bad and all the way to so-bad-it's-actually-perversely-good. Basically, if you're wondering whether or not it's worth tracking down and watching Bad Girls, answer this simple question: do you think it's likely you will enjoy a Taiwanese teen romantic comedy starring pop stars as high school students? If the answer is yes, then give it a shot. If the answer is no, or even an unenthusiastic 'maybe', then you should probably give Bad Girls a wide berth.

Ella Chen is a curious lead for this film. She's one of the three members of S.H.E., one of Taiwan's most successful (and most listenable) pop groups. Here she's playing a 16 year-old martial artist high school student with a hair trigger temper and an obsession with eating bread. On the plus side Chen is extremely engaging and has great comic timing: she really is enjoyable to watch. On the other hand, it's hard not to notice that Chen is 32 years old; she is literally playing someone half her age. Now this isn't unheard of in teen comedies: Stockard Channing was 34 when she co-starred in Grease, while Luke Perry was already 24 when he first appeared in Beverly Hills 90210. That doesn't stop Chen from looking more than a little out of place, and it's quite a distraction during the film.

Her co-star Mike He is nowhere near as interesting. He plays teen idol Justin, who doesn't want to be a singer/actor superstar and would much rather retire from show business and bake bread like his father.

Wait a minute: a teen heartthrob decides to shoot a film in a rural high school, where the girl who cripples his co-star is cast in her place and they start a romance and he wants to bake bread and she wants to eat bread? Yes, it's that kind of a movie: a ridiculous and unfeasible chain of coincidences centered around the act of eating baked goods.

Sorry, I was talking about Mike He. I don't think I've seen him in anything before, so I can't tell whether he's a wooden actor or simply bored with appearing in this film. Either way, he's a real drag on the romantic core of the movie.

As I mentioned, some parts of this film do genuinely work on their own merits. There are some odd segues into surreality (Ah Dan kicks one romantic suitor so hard that he crashes into the moon), and a brilliant opening sequence based around Dan's little sister, plus what moments we see of the movie Justin and Dan are shooting are perfectly pitched parodies of how Asian romantic dramas tend to look and sound. Overall, however, it's a dreadful mess.
Posted by Grant at 9:04 AM