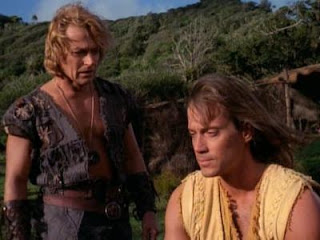 In a flash of light, the vengeful goddess Hera murders Hercules' wife and children, leading the demigod on a violent mission of revenge. Meanwhile Hercules' long-time travelling companion Iolaus travels in his stead to a village cursed by a snake-like she-demon with the power to turn people to stone.

Hercules: The Legendary Journeys doesn't really start with a bang, it just sort of... starts. The five TV movies of the previous year had been commercially successful for Universal Pictures, so they were quick to order a weekly series as a follow-up. This truncated (13 episode) first season premiered in January 1995, just two months after the last of the TV movies aired on American TV. Kevin Sorbo is back as Hercules, the presumably very expensive Anthony Quinn is curiously absent as Zeus, but Michael Hirst is along for the ride as the diminutive yet plucky sidekick Iolaus.What we're ultimately given here is more of what we got in the TV movies. It's been refined a little, and at 40 minutes per episode feels a lot tighter and more watchable, but if it isn't broke why fix it? This is a commercial hour of mostly breezy, slightly silly pulp fantasy adventure.

Not that it's perfect. For one thing the early off-screen deaths of Deianeira and her children is one of the most inelegant ways of writing out characters I think I've ever seen. Clearly a series in which Hercules travels across the ancient world righting wrongs is unlikely to work as well if he has a wife and kids somewhere back home, and yet there must have been a better resolution than this. Tawny Kitaen (Deianeira) doesn't even appear outside of archival footage. It's not quite a 'women in refrigerators' situation, in which a female supporting character is killed to emotionally motivate the male lead, but it instinctively feels close to that.

Of course with Deianeira out of the picture the series is free to get very gently homo-erotic in the way it deals with Hercules' friendship with Iolaus. Michael Hirst is an incredibly funny actor, and makes the most out of his comedic scenes here as he leads a doubting villager back to fight the she-demon. In the other plot thread Hercules is teamed up with a freed slave named Aegina (Clare Carey). This sequence is bizarrely flirty considering one half of the relationship just lost his wife and children in a ball of fire.

By the episode's end Hercules has neatly resolved his anger and guilt over his family's death, and sets off upon his titular "legendary journeys". It's a clunky, cheap, cheerful episode with some critical flaws but a lot of charisma and heart. I have to admit I enjoyed watching it a lot. Sometimes you're going to want a dense, layered TV drama like Breaking Bad or Deadwood. Sometimes you're just going to want to relax in front of some fluff. This is fluff, but it's fun fluff.
Posted by Grant at 8:49 AM