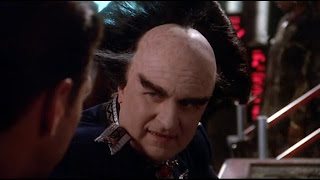 An Earthforce representative (Tucker Smallwood) arrives on Babylon 5 to investigate the late Lt Keffer's sighting of a Shadow vessel in hyperspace. Also arriving on the station is Marcus Cole (Jason Carter), a Ranger assigned to assist in the coming war against the darkness.

"Matters of Honor" launches Babylon 5's third season in a mostly satisfying way. There are a few bumps and scrapes on its way through, but it's overall a very entertaining hour of television. One element that does deserve praise first and foremost is how it carefully reminds the viewer of all of the important plot points that he or she will need to make sense of the coming year. Almost all the regular cast get a moment - I think the only one I missed was Vir - and each of their personal predicaments is explored and laid out in a tight and seemingly effortless fashion. That's pretty hard to do, and Straczynski deserves praise for managing it.

This episode introduces a new regular in the form of Marcus Cole (Jason Carter). It's kind of funny that, after resisting Warner Bros' demands to introduce a dashing male action hero through Season 2, Straczynski kills off Lt Keffer and immediately introduces another dashing male action hero. This one feels like he has been developed on Straczynski's terms: a little less of an American cliche, and a better fit to the theatricalised, overly wordy environment of Babylon 5.

Also introduced is the White Star, a new super-powered starship that Captain Sheridan can use to fight the Shadows. On a superficial level it's rather amusing to see, after complaining for so long that Star Trek: Deep Space Nine was copying Babylon 5, Straczynski introduced the White Star fourteen months after DS9 introduced the USS Defiant. On the other hand, each ship clearly serves a different purpose: rather than simply a means of getting the series off the space station from time to time, the White Star is a necessary device to give the heroes half a chance of defeating the Shadows.

Sadly it's the mid-episode segue on the White Star that feels the least accomplished element this week. It's in an episode surrounded by intrigue, conspiracies and ominous conversations, and it's as if the episode proper is put on hold for ten minutes for a half-hearted space fight. There is no logical reason whatsoever for Sheridan to command the ship for a few hours, when it could easily have been used by someone else and avoid the episode's complications entirely. In short, it feels shoe-horned in, and fails as a result.

More effective are Londo's exchanges with Mr Morden, in which the consequences of his accepting Morden's help become clear. The over-arching title of Season 3 is "Point of No Return", and it's a theme that is already growing apparent.

A new season, a new set of opening titles. This one is narrated by Claudia Christian (Ivanova) and features an entirely new theme that's a lot more sombre and ominous, presumably the match the war footing the series is now standing on. It would work brilliantly if it wasn't for the weird cavalcade of turning heads throughout the second half of the credits. Particularly off-putting is Richard Biggs' sort of smirking half-nod, that makes it look like in among all of the serious gravitas the station doctor is thinking 'War, hell yeah. Lots of work for a doctor to do.' I know the opening titles should be the least concern when reviewing an episode of a TV series, but it really does flummox me that for three years in a row the production team were incapable of producing a normal set of opening titles. This one loses the nicely iconic theme music but forgets to introduce anything worthwhile in return. Shame.

So "Matters of Honor" isn't perfect, but it is enjoyable. I have my fingers crossed that the season will continue in the same vein.
Posted by Grant at 2:33 PM