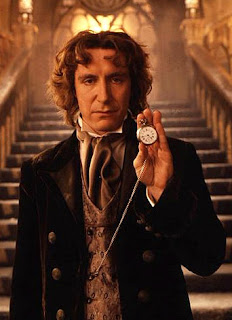 Who50 counts down to the 50th anniversary of Doctor Who by reviewing my favourite episodes and serials over the history of the programme, counting down from #50 to #1. Today, #49: Doctor Who, a 1996 made-for-television film written by Matthew Jacobs and directed by Geoffrey Sax.

The TV Movie is possibly a contentious pick for one of Doctor Who's fifty best stories. It's been a controversial episode in the series' history pretty much from when the idea of an American co-production was first mooted in the early 1990s. Lots of fans seem to actively hate it. I've even seen some, albeit a thankful minority, attempt to claim that the TV movie "doesn't count" and that Paul McGann is not a "real Doctor".

This is insanity: Paul McGann is an outstanding Doctor. He slips into the role with such apparent ease. I remember when Peter Davison debuted as the Doctor. It took me a full four episodes to accept him in the role. Colin Baker took me half a season. Sylvester McCoy took me a couple of weeks. Paul McGann took about six minutes. There's something about his gushing enthusiasm and intensity, oblivious to how silly he may look or sound, that simply convinces. He's that perfectly-formed English eccentric that American audiences would have gone crazy for, had the TV movie not been broadcast against one of the highest-rated episodes of Roseanne ever.

Of course it was broadcast against Roseanne, and as a result the American viewing figures weren't sensational. Fox didn't go ahead with a series, and when the BBC finally realised they could produce the series on their own the idea of bringing McGann back was never on the table. So for we Paul McGann fans, this is all we get. Sure there were a truckload of excellent novels published, and a bunch of great audio dramas recorded, but for me Doctor Who is ultimately a TV show. I want to see the Doctor as well as hear him. As a result this is McGann's first, last, best and worst story. It's a television tragedy: like Fox cancelling Alien Nation in mid-cliffhanger or Bewitched changing Darrens. We deserved more. McGann deserved more.

Then there's Eric Roberts (or, as South Park like to call him, "TV's Eric Roberts") as the Master. He nails the character. He is for my money the most underrated Master of all time. He's intelligent. He's funny. He's evil. He's mentally unwell. There's a world of visible potential in him. I can imagine annual episodes of an American Doctor Who pitting the Roberts Master against the McGann Doctor. It's such a shame that Big Finish haven't managed to get a deal to work to bring him to the audio dramas. There's one scene in particular: the Doctor and his de facto companion Dr Grace Holloway are in an ambulance, sitting next to a paramedic. The paramedic's actually the Master, not that the Doctor realises this. The Doctor and Grace begin to have a fight. The Doctor mentions that he's met Madame Curie. "Did she kiss as good as me?" snaps Grace. "As well as you." corrects the Master. He's got the Doctor in his grasp, utterly unawares. He could kill him in a second. He could win. Instead he'd rather correct Grace's grammar. That's the Master. That's a more authentic Master in one line than anything we got from Anthony Ainley in the 1980s.

Yes, the episode itself is bonkers silly and not outrageously good. Making the Doctor half-human is a terribly bad idea, conceived and insisted upon by the BBC trying (and failing) to think like an American broadcaster. A lot of the supporting characters are quite annoying. No one can explain what a temporal orbit is, or precisely how the TARDIS can bring the dead back to life. I don't care: this is the only adventure for a brilliant version of the Doctor and a hilarious version of the Master. I can overlook the faults, and I will take what I can get.