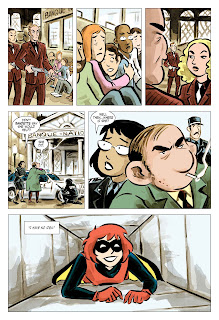 For the month of November, all profits earned by Monkeybrain Comics from their digital titles are being donated to the Hero Initiative.

The Hero Initiative is an important charity for the comics industry. For decades the only income earned by America's comic book artists, writers and creators was a simple page rate with no ownership of their work or characters and no residuals or royalties to carry them into retirement. The Hero Initiative has helped more than 50 comic book veterans in the past decade or so to the tune of about US$500,000. It's very important, commendable work, but they constantly need donations. I applaud Chris Roberson, Allison Baker and the rest of the team at Monkeybrain for making this significant high profile donation.

So help out, and reward them. Get onto Comixology and download a few of their titles. I'm reviewing Olive Hopkins and the Ninth Kingdom under the cut, but I strongly recommend you also check out Bandette (pictured to the left), Masks and Mobsters and Edison Rex. They're inexpensive, creative and very enjoyable.

As part of their Marvel Now! relaunch, Marvel Comics have introduced this: an anthology title teaming up superheroes from the Avengers with mutants from the X-Men. I remain a big fan of the one-shot superhero comic, and was keen to check this title out. Sadly it's pretty disappointing: two stories are squeezed into each issue rather than one, which I think is a mistake. The first story (by Dan Slott) features a time-travelling Cable teaming up with Captain America and Bucky in 1943. This is a really fun story, and could have benefitted from a few extra pages. Those pages, however, are devoted to a dull and pointless sequence (by Jeph Loeb) of the Hulk and Wolverine fighting future versions of themselves before ending with a cliffhanger. Going by the cover of issue #2 that cliffhanger isn't getting resolved next month. So, in summary: nice idea, poor execution. (2/5)

Okay, Geoff Johns needs to stop it with the whole "Hey guys! Aquaman is hardcore! He's badass! No, really!" routine. Everybody who reads Aquaman likes the title character, otherwise we wouldn't be reading it. I want a happy Aquaman who fights crime and talks to fish. What I don't want is a shirtless angry Aquaman threatening to murder Black Manta for cutting one friend's throat and severing another's spine. I don't want Aquaman graphically snapping the villain's arm in two. I don't want portentious brooding with my light-hearted underwater adventure. I particularly don't want to be reminded every damn issue that Aquaman is a hardcore badass and everyone should be giving him more respect. Nice art Reis, Prado and Ferreira though, as always. (2/5)

Dustin Nguyen's cute-as-a-button chibi (It's a Japanese thing. You've got Google.) illustrations of the Batman cast have been attracting a lot of attention in the last few years, so the only surprise with this Halloween-themed digital comic is that it took DC so long to publish it. This is a very sweet, funny comic. It's not a classic, it won't set the world on fire, but it is a comic book you can safely share with young children - and that's more than you can say for DC's proper Batman titles. (3/5)

Oh my word. I'm still unpacking what I've read in this debut issue, which is unexpectedly thick for a $3.50 Image title. It has a quite wordy (but not unnecessarily so) script by Nick Spencer, and fantastic art by Riley Rossmo (whose work enchanted me in Debris) and Frazer Irving. Imagine if the Joker from Christopher Nolan's The Dark Knight successfully faked his own death, switched sides, and decided to become a hero. That's probably the best description I can manage, and it doesn't come close to doing this book justice. This is a dark book: be warned, there is one instance early on of quite horrifying deadly violence against a small child. There is a mass murder. These moments are extreme because they're integral to the story Nick Spencer is telling. Imagine a Batman comic pushed to a logical extreme that acknowledges the Joker's actual mental illness. I'm hooked. Image is on fire this year. I haven't reacted so positively to a debut issue since the launch of Vaughn and Staples' Saga. (5/5)

The second issue of Happy doesn't feel quite as strong as the first, but I think that's more of a structural issue than any lack of quality of Morrison and Robertson's part. The plot is already beginning to slot into place and make sense, and is revealing itself to be a remarkably bizarre premise: a kidnapped young girl's imaginary friend has recruited a drugged-out professional assassin to rescue her from a serial killer. My only caveat with this comic is that a serial killer of young girls - aside from being icky in a "do I really need to read this?" kind of way - feels like it's been done before too many times. God, that's depressing. (4/5)

I don't understand these "point one" issues that Marvel keeps putting out. What is there in this issue that prevented it from being a one-issue segue in Ultimate Comics Spider-Man #17? This issue bizarrely leads the editorial team of the Daily Bugle so close to learning the new Spider-Man's identity that the only reason they won't will be either deliberate effort, disinterest and incompetence. An oddly weak and uninteresting issue for a typically awesome comic book. (3/5)

A lot of science fiction and fantasy fans would get a real kick out of this comic if they knew it was out there. It's a light-hearted high fantasy, deliberately rich in Dungeons & Dragons style tropes, but starring a magically transplanted cynical graduate student (the titular Olive Hopkins) who can't help but comment on how stupid everything is. It's not a classic comic, it's not perfect, but it's funny and enjoyable and available on your tablet or smartphone of choice at the press of a screen and a $1.99 micropayment. Plus, as noted above, all profits this month will go to an important charity. (3/5)

Winner of the week: Bedlam #1, by a country mile. A sensational, challenging, vivid, must-buy comic.
Loser of the week: Aquaman #13. Geoff Johns needs to cheer up, or at the very least let Aquaman cheer up.
Posted by Grant at 10:39 AM