An appreciation of Mary Blair 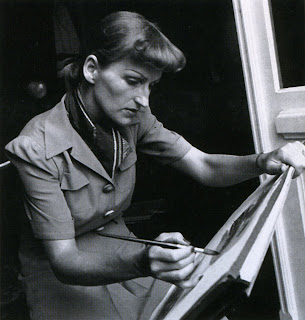 I am an enormous fan of Mary Blair, and it makes me sad that she remains relatively obscure in motion picture history. Mary was born in 1911 in Oklahoma. She was from an early age a keen artist, and eventually won a scholarship to Los Angeles' Chouinard Art Institute. She made the shift from fine art to animation art due to her husband Lee, and in 1940 she joined him as an artist - as far as I'm aware the only key female artist - at the Walt Disney studio.

Mary contributed design art for several noted Disney productions, including Dumbo, Fun and Fancy Free and Song of the South.  In 1941 she accompanied Walt Disney and others on a government-funded research trip to South America: the purpose was to create animated features set in South America that would encourage those nations to side with the Allies in World War II. As a result Blair provided designs for Saludos Amigos and The Three Caballeros as well.

It's in the early 1950s that Blair's work really made an impact. She was the colour stylist for three films in a row: Cinderella, Alice in Wonderland and Peter Pan. Her work on these three films pretty much shaped and perfected the classical look of Walt Disney animation.


One major way in which Mary Blair changed animation was in her use of colour. Prior to 1950, animated films were generally quite garish affairs, with contrasting colours used for visual impact. It was Blair who started designing colour schemes with different shades of the same colour. This created an increased subtlety to the visual palette of cartoons and animated features, and created a far more pleasing image.

Blair does differ from other Disney production designers, because her work was never fully translated to the screen. Her work, which was unusually stylised and abstract for production art, was used more as inspiration for the animators than a template: a resource rather than a blueprint.

Of course the trade-off for this is that, separated from the films they were created for, Blair's paintings are absolutely stunning in their own right. They pop out at you, with their bold use of big abstract patches of colour and an almost-gestural attention to the characters and landscapes. She may not have graced the walls of the Tate Modern or the Guggenheim, but for my money Mary Blair is one of the greatest artists of the 20th century. I like her as much as I like Rothko or Bacon.

After leaving the Walt Disney company, Blair worked extensively as a freelance graphic designer and illustrator, including providing art for several Little Golden Books that are still in print today. She returned to Disney in the 1960s at Walt's personal request, to design the legendary "It's a Small World" attraction. One of her murals (27m high!) remains on display at Walt Disney World.

Blair died in 1978, and was posthumously humoured with awards. Walt Disney declared her one of their "Disney Legends". She got a Google front page in 2011 for her 100th birthday. It's a shame the accolades didn't come when she was alive, because Mary Blair really was a sensational, influential, utterly wonderful artist.

If you want to have a look at some more outstanding Mary Blair art, check out The Magic of Mary Blair, Cartoon Modern, or the delightful named Fuck Yeah Mary Blair.
Posted by Grant at 9:39 AM