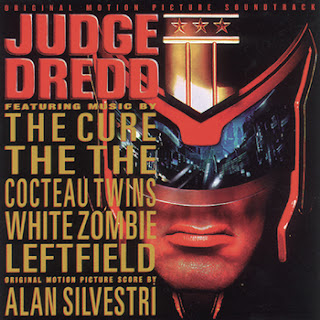 There is a phenomenon I noticed in the 1990s, and while it isn't as common nowadays it's still something that I always keep half an eye out for. It's the phenomenon of "good soundtrack, bad movie". I don't mean the musical score underlying a film's action - although there are plenty of bad films with good scores - I'm talking about the soundtracks: albums filled with pop songs that may or may not have appeared during the film in question.

The movie soundtrack in the sense that we know it today - a group of contemporary pop songs collected together as a 'various artists' release and with the movie's key art splashed all over the cover - was pretty much invented by Hollywood producers Don Simpson and Jerry Bruckheimer for their film Flashdance. It was a genius move: a popular film could now dominated the Billboard charts at the same time as the box office. It allowed for synergy between business divisions, since most companies that owned a film studio also owned a record label (and those that didn't rapidly set one up).

A new wrinkle on the soundtrack album came to prominence with the 1994 soundtrack to Alex Proyas' film The Crow, which featured all-new songs composed by pop artists specifically for the movie. This is a whole different beast entirely, and of far greater interest to music fans. If you're a fan of The Cure, for example, your record collection is incomplete unless you get the soundtracks to The Crow ("Burn") and Judge Dredd ("Dredd Song"). Yes, Judge Dredd - to be clear, not the recent one written by Alex Garland.

And this is the thing: you can have a terrible, terrible movie, and it can have this fantastic tie-in album with brilliant pop song unavailable anywhere else. The Judge Dredd soundtrack also includes contributions from White Zombie, The The and the Cocteau Twins. Under the cut are three of my personal favourites: the movie may be bad, but the soundtrack is well worth tracking down. 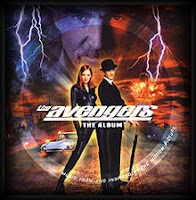 The Avengers
The extraordinary thing about this soundtrack is that, apart from a couple of tracks crammed into the closing credits, none of these songs actually made it into the final edit of the movie. Which is strange, because they're all original songs thematically arranged around the plot of the film: songs about winter, snow, evil twins, and so on. It starts with an obligatory mid-1990s remix of the Avengers theme tune (Lost in Space and The Saint got similar remixes on their albums), and then dives into a range of great tracks by Babybird, Sinead O'Connor, Ashtar Command, Roni Size, Annie Lennox and even Grace Jones. This is probably my favourite movie soundtrack album: all good songs, none of which I ever feel the urge to skip, all promising a much funkier, more contemporary film than the one audiences received.

And there is, of course, a reason for that. The Avengers was developed by a writer/director (Nicholas Meyer) with a great understanding of what made the original TV series so iconic and wonderful. That director was then dismissed, and replaced by a director (Jeremiah Chechik) with no sense of what made the series work, no sense of tone or comic timing and a dreadful ability to obfuscate and warp the storyline. The result was a film that bored test audiences shitless, leading Warner Bros to cut the running time down from 115 minutes to 87, which of course made the final theatrical cut both boring and incomprehensible. 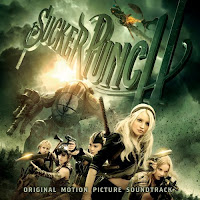 Sucker Punch
This is an album full of cover versions, and they're almost all brilliant. Produced by Marius de Vries (again!) and Tyler Bates, they combine orchestral backings with rock music. Almost every song sounds like an epic. Particular highlights are covers of the Eurythmics' "Sweet Dreams (Are Made of This"), which is transformed into a very slow, dark, threatening number, and the Pixies' "Where Is My Mind?", which is turned into an absolute epic. There's also a great mashup of Bjork's "Army of Me" and Skunk Anansie. The album's low point is probably a pointless mash-up of Queen's "We Will Rock You" and "I Want It All", overlaid with rapping by Armageddon: not awful awful, but certainly a track that sends my finger looking for the skip button.

And of course Sucker Punch itself is an awful movie, packed wall to wall with unconvincing CGI and laboured nonsensical eye candy, like a child holding up a finger painting and expecting you to praise it for its emotional depth and resonance. I had a lot of faith in Zack Snyder after his tight, respectful remake of Dawn of the Dead. Then I saw 300, and Watchmen, and this, and it makes me very fearful for the quality of his forthcoming Superman movie Man of Steel. 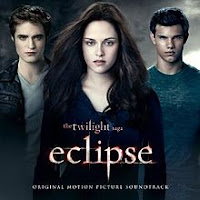 The Twilight Saga: Eclipse
This tie-in release to the third Twilight movie is headlined by an all-new song by British rock band Muse, but also has contributions from The Bravery and Florence and the Machine. I love the Florence track in particular: "Heavy in Your Arms", which is a deep, forlorn, weighty number. She's got such a wonderful singing voice. It's worth tracking down the album for that one song alone.

Now I'm not going to criticise Eclipse, because my total viewing experience of the Twilight saga runs to about 10 minutes of the first film viewed in a hotel room some years back. I can surmise from the publicity and the clips I have seen that these films are not for me, thus I haven't spent the time checking them out. General consensus among friends, however, is that they're a pretty dire bunch of movies, so I figured since I love the soundtrack album it's worth putting it in here.
Posted by Grant at 9:53 AM