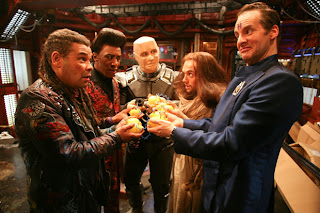 The team get stuck on 1st century Earth and need to create a lemon-based battery to power the remote control that can restore them to the future. On the way they meet a noted historical figure in India, with typically disastrous results.

I feel like this season of Red Dwarf is charting some kind of twisted course through the history of the series. While the first episode felt like something out of Season 4 or 5, and the second like something out of Season 1 or 2, "Lemons" feels much more like a late-season episode - only actually quite funny and with more to recommend it than most of Red Dwarf's later instalments.

I have to applaud Doug Naylor for tackling as controversial a comedy subject as Jesus. For a series that had descended into catch phrases and running jokes by the mid-1990s, it's actually quite a surprise to see Red Dwarf get a bit of an edge again. Emmerdale actor James Baxter does a great job as Jesus, a character a lot more weak-willed and suggestible than Biblical sources may have suggested.

I had a few minor issues with the episode's pacing: some elements felt they could have been afforded more time, such as Jesus travelling millions of years into the future with the Red Dwarf crew - there were a lot of opportunities for humour there that time constraints prevented from flourishing. On the other hand, the final payoff was definitely worth it.

The hard-core fan in me questioned Rimmer's explanation that his mother was a member of the Church of Judas, since I seem to recall her being a Seventh Day Advent Hoppist in earlier seasons. As Terry Pratchett once noted however, never let continuity get in the way of a good joke.

This is probably the least effective of Red Dwarf's three new episodes so far, but it remains genuinely funny and definitely worth watching. That's three for three so far - we're still running a cumulative score of 100% for the season. If you'd told me this a year ago, there's not a chance in hell I would have believed you.
Posted by Grant at 9:12 AM