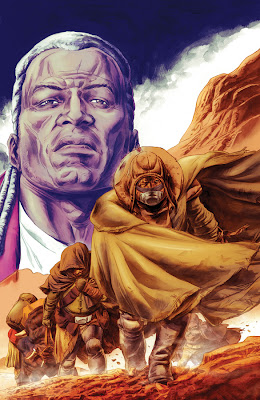 Last Wednesday yet another science fiction comic debuted from Image (Storm Dogs, reviewed under the cut). This arrives on top of Debris, Saga, Manhattan Projects and Prophet. It's impressive - and well overdue for the industry - how Image is going out of its way to prove that science fiction is a fantastic genre for comic books and graphic novels. Add in works of fantasy and science fiction from other publishers (Saucer Country, The Unwritten and Fables over at DC Vertigo, Orbital at Cinebooks, et al) and speculative fiction in general is doing exceptionally well in comic books at the moment.

I am keen to see if this influx of quality genre work into the field has any effect on the Hugo Awards in 2013. Since 2009 the Hugos have included a Best Graphic Story category, but the voters' choices for nominees have been somewhat odd to say the least: TV spin-offs, webcomics and in one case a Neil Gaiman two-part comic that wasn't simply not the best comic of the year it wasn't even the best Batman comic in which Batman died and had an afterlife experience for that year.

2013 is a key year for this category in the Hugos. With so many worthy works eligible, this is the year that Hugo voters can either prove they know a damn thing about English-language comic books or consign their category to an amusing irrelevance for the future.

This one is a complete no-brainer: an adaptation of Japan's most famous samurai legend, featuring art by the famous Stan Sakai (Usagi Yojimbo)? It's a near flawless piece of work: well paced and beautifully illustrated. It's perhaps a surprise that this is being released in monthly issues rather than as a single graphic novel, but it does force you to concentrate more closely on this opening chapter on its own merits. Mike Richardson does a great job with the script, reflecting a formalised Japanese society without ever resorting to overt cliches. (5/5)

Since it's debut last September Grant Morrison's Action Comics has been frustratingly uneven. For every exceptional issue there's been a disappointing one, and there's been an overall lack of direction to the comic. With this issue it feels like we're finally getting somewhere: Superman gets to be iconic (there's a great splash page with the best hero shot I've seen in ages), and the oft-mentioned Multitude finally reaches Earth's solar system. I enjoyed the hell out of this, and Sholly Fisch's backup strip is wonderfully poignant. Very possibly the best issue of the New 52 Action Comics so far. (5/5)

After an interminably long build-up, "Rotworld" is turning out to be very anticlimactic. By creating such excessive death and destruction across the DC Universe it's clear that Lemire will be slapping a reset button by the time this story is over. As a result it's very difficult to get properly engaged with what's going on. This issue also follows a slightly bizarre agenda against writer/artist Rob Liefeld: every rotting, cadaverous superhero that Animal Man fights is one recently written by Liefeld (before his acrimonious split from DC) and special mention is made of how stupid Hawk (of Hawk & Dove) looks. I started Animal Man with such enthusiasm and it's all but completely slipped away. (2/5)

Batwing's fight against the cult of Father Lost continues. There's still a lot to like about Batwing, which is always enjoyable without being particularly memorable. In this issue, however, I took issue with a needlessly bloody cliffhanger in which the female co-lead gets brutally stabbed in the gut in order for Batwing to get upset. I really thought we were beyond these sorts of "women in refrigerators" nonsense. This would have been a three-star comic, but it gets one star taken off for being so refrigeratory at the end. (2/5)

We're two issues in, and Detective Comics has really picked up with the arrival of John Layman as writer. This issue weaves Poison Ivy into Batman's fight against the Penguin, and it's written in a clever, non-linear fashion. Jason Fabok's artwork is great. A backup featuring art with Andy Clarke provides some context to one of the issue's more surprising twists, and is more interesting and relevant than the usual DC backup strip as a result. This is a solid, entertaining Batman adventure - Detective Comics hasn't managed to be that in a while. (3/5)

Image's sterling run of quality science fiction comics continues. In this, the first part of six, a team of specialists arrive on a distant planet populated by miners and two distinct indigenous species. In many respects this book reminded me of the excellent French comic series Orbital (published in English by Cinebooks). It doesn't feel particularly original, but it does look great and reads like a smart, high-quality thriller. The final few pages appear to promise an interesting blend of science fiction and horror. (4/5)


DC Comics. Written by Peter Milligan. Art by Will Conrad and Cliff Richards.

So to quickly save time, the Stormwatch team continue to fight Etrigan the Demon, and links between this comic and Demon Knights are further hinted at. On its own merits it's fine, and fairly enjoyable. My main concern, however, is what is Stormwatch for? What purpose does the title serve? They're apparently a top secret superhero team that tackles things the Justice League can't, but what in the last 15 months have they done that merits their existence? While the quality has visibly picked up in the last two months this title still suffers from a profound lack of direction. (3/5)

Oh Helena Wayne versus Damian Wayne, you had me at hello. The first meeting of Batman's son and sort-of daughter is as entertaining as I hoped it would be. It's well paced, funny and action-packed. At the same time Power Girl hunts for clues as to where Apokalips technology might be hidden on Earth. Something that continues to impress me with this comic is how seamlessly the art of Kevin Maguire and George Perez fits together - more comic books could learn from this sort of format. (5/5)

Winner of the Week: 47 Ronin is a class act from start to finish.
Loser of the Week: It started so promisingly, but the glacial pace has bored me right off Animal Man.