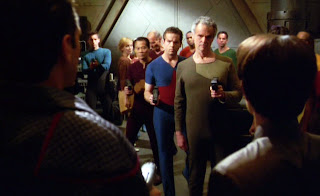 Following a lead from a rogue trader, the Enterprise investigates a crashed spacecraft. It seems to be long-abandoned, and the crew take a shuttle down to take a closer look. There they discover that despite negative scans the wreck's crew are alive and well. Or are they?

There's a strange sense of deja vu about "Oasis", until the penny drops and you remember that you've actually seen this episode before. It's Deep Space Nine's "Shadowplay", in which a sad old man has resurrected his friends and family as unwitting holograms. That version was written by Robert Hewitt Wolfe; this version is by Stephen Beck, Rick Berman and Brannon Braga. If was was Wolfe, I'd be asking for some royalties.

Maybe I should cut this episode some slack: "Oasis" is, after all, the 647th episode of Star Trek. It's understandable that the same themes would crop up again and again. There are only so many ideas, after all. On the other hand, maybe I shouldn't cut them some slack. Rick Berman produced "Shadowplay". He also produced "Oasis", and is credited with co-writing its story. Did he just not remember? Did he just think nobody would notice? Did he simply not care? Twenty-six episodes to make in one year; they can't all be winners. Recycle an old idea, get through week 20 and move on to something more interesting in week 21.

Who can tell? What I can tell is that "Oasis" is a pretty boring episode. You can skip it easily, and if you've watched "Shadowplay" then you can skip it very easily. That means we've still got 11 good episodes. With 19 episodes down, that gives us a running "worth your time" proportion of 58%. Such a promising start, but as Season 1 continues Enterprise is beginning to slip.
Posted by Grant at 6:42 PM