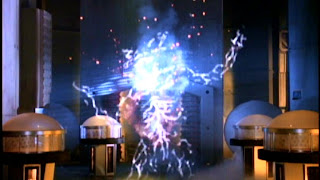 An early Earth spacecraft drifts into the station's vicinity, carrying within it a cryogenically frozen explorer who's been on ice for a century. If a homeless veteran in the bowels of the station is to be believed, it has also carried an invisible, demonic entity to the station - an entity that murdered his entire team during the Earth-Minbari War. While Garibaldi investigates, Dr Franklin cares for the revived century-old explorer.

Is it just me, or is Dr Franklin a hysterically bad doctor? He comes dangerously close to taking advantage of his patient. It isn't as if she makes the first move - he's fawning over her and stroking her hair as soon as she's awake. Never mind she's 125 years old or more, her husband is long dead and he hasn't actually told her either of those facts yet - our hair-strokey doctor is deeply inappropriate at best. No wonder she abandons him at the end of the episode to return to Earth. If it was me I'd have been running for the hills from the fifteen-minute mark. Thankfully I wasn't the only one to notice Dr Franklin's malpractice: Garibaldi calls him out on it, and Sheridan gets pretty short with him as well.

Dwight Schultz guest stars as the homeless veteran Amin, and the script gives him the opportunity to over-act mercilessly and occassionally give his character a little bit of depth and resonance. He also allows Garibaldi to get a little more backstory - it turns out our security chief was, like Amin, a "ground pounder" during the Minbari war as well.

All up, "The Long Dark" is one of those horrendously uneven episodes that shares a generic premise, some terrible cliches and stereotypes, and occassional moments of depth and quality. Story arc watchers will note the reference to the planet Z'ha'dum - this is the third time I think they've mentioned it. Must be important...

Despite some nice moments here and there, I'm going to have to give the thumbs-down to "The Long Dark". It's just a little bit too much of a chore to watch. That leaves us with only two good episodes out of five so far, or just 40% for the season. Crikey.
Posted by Grant at 9:15 AM