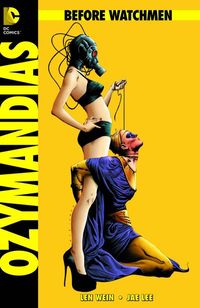 Another week of DC's sprawling Before Watchmen prequels (Ozymandias #2 for those keeping track), and another week where I simply don't care about them. I don't begrudge DC for publishing them, I don't begrudge Alan Moore for wishing they wouldn't, and I certainly don't begrudge the writers and artists who are producing them (I've seen at least one individual online label them "scabs", which is more than a little harsh and actually very insulting). I just don't care. Watchmen is a perfectly constructed 12 issue maxi-series with a beginning, middle and end. I don't care what happened before it, and before DC get any ideas I definitely don't care what happens after it. I'm happy with the collected trade paperback I have and don't need further backstory.

I was going to buy and review The Massive #3 this week, but the shipment to my local comic shop was damaged so I'll have to wait on that one. Whatever week it arrives, I'll try to review it. Based on the first two issues though it's definitely a comic you should consider picking up, particularly if you liked previous titles by Brian Wood such as DMZ.

Under the cut: Batgirl, Batman, Batman and Robin, Demon Knights, Frankenstein: Agent of SHADE, It Girl and the Atomics, Spider-Men.

As Stanley Lau's cover demonstrates, this issue showcases the first meeting of Batgirl and Batwoman. It's beautifully pitched, showing that for all their superficial similarities (bat-costume, long red hair) Barbara Gordon and Kate Kane operate as very different kinds of superheroes. Particularly effective is how quickly Simone manages to shift their relationship from head-on rivals (as these kinds of meetings often begin) to mutual cooperation and respect. This current storyline is covering some pretty dark territory with elements of survival horror, but its beautifully drawn and well constructed. Pity about the life-and-death cliffhanger that - thanks to next month's issue #0 - won't be resolved until October.  (4/5)

This is something of a milestone: believe it or not, this is the first time in the 70+ year history of Batman and Detective Comics that a woman has provided the artwork for a core Batman title. Becky Cloonan does a fantastic job of this, with expressive and character-filled art that flies off the page and makes this a wonderful read. This largely self-contained issue focuses on Harper Row, an enterprising Gotham teenager whose encounters with Batman over the last 11 issues have slowly introduced what I suspect will be the Batman franchise's next fan-favourite character. She's certainly mine. The back eight pages of this issue are provided by James Tynion IV and Andy Clarke, and while the change in art style is pretty jarring the quality of the script doesn't waver. This is a wonderful comic, and I love that after 11 issues of the Court of Owls Scott Snyder has written such a refreshing breather before things go to hell in October when the Joker returns. More please - and get Cloonan a full arc on this title as soon as possible! (5/5)

There is a panel halfway through this issue that depicts the most heroic shot ever of the Robins: Nightwing, Red Hood, Red Robin and Robin all standing together looking up to the Batman. I'm a fan of all four Robins, and I like the direction this current arc has taken in showcasing all of them: the four sons - both biological and adoptive - of Bruce Wayne. I particularly loved the final exchange between Dick and Damian, which felt like a genuine big and little brother conversation, and reminded me of their brilliant chemistry back in the pre-52 version of this book. Quality-wise this second volume of Batman and Robin isnt't hitting the heights of the Morrison-created original, but it's still a consistently enjoyable read. (3/5)

Paul Cornell's Dungeons and Dragons game continues. It's a glib description, but it's also quite accurate - and I don't intend it to be a criticism. His band of in-fighting untrustworthy wizards, warriors and demons continues to entertain as they violently shamble from one adventure to another. Here they're neck-deep in Arthurian myth, fighting alongside Arthur to defeat Morgaine le Fay and recover Merlin's dead body.  To do that they've got to make their way through Merlin's trap-filled magical tower that's bigger on the inside than the outside. That's right: Merlin has a TARDIS.  Like Batgirl, however, this comic ends on a cliffhanger that won't be resolved until October. Damn you DC, and your unnecessary September issue #0s! (3/5)

Given how its sales are trailing down into the 15,000s, I'm not sure that Frankenstein is much longer for this world. This would be a shame, as it's been an entertaining DC-themed riff on Mignola's Hellboy and I've been enjoying every issue. This issue wraps up the Leviathan storyline in a slightly odd fashion: it's all basically retold in the past tense, skipping over a lot of detail you'd have seen in a more conventional comic narrative. This has the advantage of speeding through two issue's worth of plot in a single issue, but the disadvantage that we're one step removed from the action. As a result I wasn't as fully engaged as I could have been. The title redeems itself with a killer cliffhanger however, that's thankfully less frustrating than the cliffhangers in Batgirl and Demon Knights. (3/5)

It Girl and the Atomics #1

Madman and the Atomics was a fantastic superhero comic by Mike Allred published some years ago. It Girl and the Atomics is in essence a sequel to that series, charting the superheroic adventures of a group of beatniks transformed into super-powered mutants. While Allred is busy with other projects, this new ongoing title is written by James S. Rich with art by Mike Norton. It fits into the style of the Madman Universe perfectly, offering that unique blend of 1960s pop art superhero adventure and post-1990s indie cool. This is a brilliant and promising first instalment that's pretty much guaranteed I'll be back for issue #2. (4/5)

I think this is the best issue of Spider-Men so far, primarily because it dedicates the bulk of its running time to its characters, and not to superheroic punch-ups. We pick up where issue #3 left off, with an adult Peter Parker face to face with a teenage Gwen Stacy. How the conversation proceeds from there genuinely surprised me. Heartwarming, heartbreaking, occassionally genuinely funny ("She's a model?!") and quite surprising. This is one of those rare comic books where characters get to stop behaving like they're in a superhero comic and get to be three-dimensional, fully realised people for a change. (5/5)