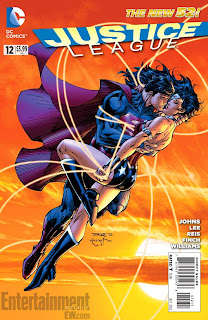 Of course the "big news" issue of this week is Justice League #12, in which Superman and Wonder Woman hook up as a romantic item. This got reported throughout the American entertainment press, and from a quick flick-through at the comic shop appears to be the kick-off for DC's massive Trinity War storyline coming in 2013. That's about the extent of my knowledge on this matter, however, and actually a bit beyond my level of interest as well.

If there's one thing DC has demonstrated in recent years, it's that their fixation on their own past inevitably leads them to restoring Silver Age status quos. Hal Jordan is ultimately going to be Green Lantern. Barry Allen must be the Flash. Barbara Gordon will be Batgirl. By the same token, Superman will always be in love with Lois Lane. It's hard to see this new liaison as anything beyond what it superficially seems to be: a canny stunt designed to drum up interest a year into the New 52.

So what else came out this week? Under the cut: Aquaman, Debris, Detective Comics, The Flash, National Comics: Looker, Prophet and X-treme X-Men.

And so we close off the first year of Geoff Johns' best-selling relaunch of DC's most ridiculed superhero. I've still got mixed opinions about this comic. Ivan Reis' art has been wonderful, making this one of the prettiest looking superhero comics on the market. I'm less convinced by the scripting: Johns seems to be on a crusade to make everybody realise that Aquaman isn't a joke, and that he's a powerful, kick-ass super-human, and that we should all stop making fun of him. The problem is that anyone reading Aquaman is by demonstration of purchasing the comic not one of those people. I feel Johns has been lecturing me for an entire year, and it's getting pretty tiring. I'm also not sure I like his violent, murderous portrayal of the character. I love Aquaman. I've loved him since Super Friends. I'm not sure I love this version of him all that much. (3/5)

This four-issue miniseries has been gorgeous to look at, and an entertaining read at the same time. It's fairly derivative stuff, but when it's executed this crisply I honestly don't mind all that much. I'm really liking the amount of science fiction Image is publishing at the moment - I always felt it was a genre that could make it big in comic books, and I think they're proving it right now. (3/5)

This one-shot annual introduces the villain Black Mask to the New 52. I've never really got to grips with Black Mask. I missed whatever storyline introduced him in the first place, and then he suddenly seemed to be a major villain throughout Batman's "War Games" and "Under the Red Hood" storylines. Now the mask itself appears to be enchanted, and leads a team of villains wearing animal masks or... something. It's hard to tell. This comic absolutely did not grab my attention at all, and by halfway through I was skim-reading. It sells for US$4.99 and is completely boring. (1/5)

Now The Flash's first New 52 annual is a much better comic, with great writing and consistently attractive artwork. It feels like a cheat, however, because it's a continuation of a storyline started in The Flash #12 and ends on a note announcing it will continue in The Flash #13 in two months' time. I'm not sure I like that. DC are basically sneaking in an extra issue of The Flash and making the readership pay an extra five bucks for the privilege. I like annuals when they're done well, and when they tell self-contained stories outside of the monthly ongoing storyline, and particularly when they give new writers and artists a chance to play with the characters. This is, while entertaining enough, basically The Flash #12.5, which isn't what I thought I was buying. (3/5)

I really like the premise of National Comics, which is an over-arching banner with which to tell single-issue reboots of obscure DC characters. It's a great testing ground for potential new monthlies, gives exposure to second and third-string characters and allows for a comparative rarity in superhero publishing: entertaining one-shots that you can buy off the shelf, read, and enjoy. This issue focuses on Emily Briggs, former supermodel turned vampire vigilante. The art by Guillem March is very Guillem Marchy, by which I mean all the characters look like supermodels. For once this doesn't seem tacky or out of place, because most of the characters are supermodels. I liked this a lot: I'd certainly buy a monthly series of this, although I suspect it wouldn't last more than eight issues or so. (4/5)

This is still one of my favourite comics of the year, partly because it's so weird to explain to people. A relaunch of a 1990s Rob Liefeld comic re-envisaged by writer Brandon Graham into a Moebius tribute. This issue is right up to standard with its predecessors: strange, surreal, thoughtful and beautiful to look at. As I mentioned above, Image are publishing the hell out of science fiction right now. (And credit to Liefeld where it's due - I intensely dislike his own writing and art style, but he's made an exceptional choice relaunching his old title in Graham's hands.) (5/5)

I love Greg Pak's writing, but it feels like he's misfiring here. I only we're only two issues in, but this comic feels scatty, unfocused and difficult to engage with. I keep getting the feeling there's supposed to a miniseries or storyline before this that I should have read, except I don't think there actually is. I know a few fans will be happy to see Dazzler leading her own X-Men team, but I'm not gripped. There are a lot of comics getting launched throughout this year, and I don't have the funds to buy them all. While there's nothing about X-treme X-Men that's particularly bad, I'm not seeing anything particularly good either. I don't think I'll be picking up issue #3. (2/5)