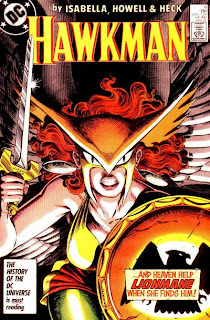 There's a beautiful piece of narration at the beginning of Hawkman #6, first published in January 1987 and part of the second volume for the perennial DC Comics superhero. It's written by Tony Isabella, and it's worth quoting in full:


"It's a jungle out there!" Those were the last words of Phil Kansy, a goodnatured cop with a knack for helping his fellow police officers laugh through the fear that could kill him. The thing called Lionmane had turned the Midway City Zoo into an alien jungle, complete with monstrous beasts that were already making short work of the zoo's usual fauna. Sure the cops were scared - so Kansy made a dumb joke and they all laughed.

Then something that looked like a vacuum cleaner hose with teeth clamped itself around Kansy's face and ate him from the inside out in six seconds flat. All of a sudden, nobody was laughing any more.

Thankfully this narration is accompanied by a splash page of an angry, magically-powered anthropomorphic lion and not, as the narration might suggest, a man getting eaten from the inside by a demonic tooth snake.

I've got a huge soft spot for Hawkman, mainly because of the wings and the silly helmet. I've been slowly purchasing back issues of his various series through the years, including the excellent Hawkworld and now this mid-1980s revamp of the character. He's paired up in this version with his wife Hawkwoman, so really the comic should be titled Hawkman and Hawkwoman or Hawkpeople. Or they could have just called it Hawkwoman and he could be the guest star in his own book. Ah well, I guess the marketing people would never have allowed it. At least she gets to feature on the awesome cover.

So the story so far: enemy agents from the planet Thanagar have deliberately exposed archaeologist Ed Dawson to a special kind of meteorite that causes him to transform into an anthropomorphic psychic lion named Lionmane. At the end of the last issue, Hawkman tried fighting Lionmane hand-to-hand and got stabbed through the chest for his trouble. (Note to DC historians: people getting stabbed through the chest does not appear to be a new phenomenon at DC.) Now Shiera, aka Hawkwoman, waits by Hawkman's bedside hoping he will wake up - with Lionmane running rampage at the Midway City Zoo.

Blimey charlie, this comic is bonkers. It's got a plot from the 1950s and levels of violence from the 1980s. The creative team should have been checked out for whiplash. Richard Howell and Don Heck provide the art, which is in a typical style for period and very cleanly drawn and easy to read. The dialogue is mostly either quite old-fashion or deeply strange ("Judas Priest! It's those man-eating plants!", for example).

By the story's end Hawkwoman has taken on Lionmane and just scraped through to victory. She gets back to the hospital and her husband's already sitting up in bed playing cards. The cad. From critical condition to playing cards in the time it takes Shiera to beat the crap out of a talking lion. That bastard.
Posted by Grant at 8:53 PM