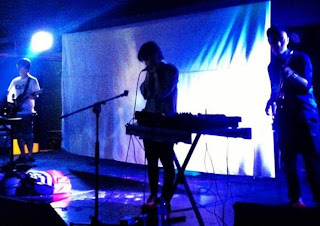 I don't understand people who dismiss Hong Kong. I've been involved in many conversations - more than I can count, actually - where someone mentions they went to Hong Kong, and someone else asks them what it was like, and the first person sort of sniffs and says something along the lines of 'Oh, it's OK, if you like that sort of thing. It's all air-conditioned shopping malls, really. Totally soulless.' Then they usually recommend some sort of hipster-ish holiday destination they think is much better. And this saddens me every time, because it means the first person failed to find the real Hong Kong beyond the touristy veneer, and it means the second person has probably been discouraged from ever trying.

Hong Kong is an awesome city, and it's only getting more awesome over time. In recent years, for example, there has been a positive explosion of independent music in the city that defies its image of clean-cut idol singers and manufactured girl groups. One of the epicentres of this musical scene seems to be the live music venue Hidden Agenda.
It's a low-tech, grungy kind of a venue. Not only does it lack any sort of government support, the Hong Kong administration seems oddly intent on shutting them down. They're already onto the third of their industrial area warehouse venues. I went there when they were in their second, so I can't comment on what the place looks like now or even how to get to it.

I know that in October 2011 Sonia (my wife) and I had to leave our hotel in Wan Chai, change MTR train a couple of times, get off in Kowloon Bay, walk down the side of highway until we entered a deserted industrial precinct. If you've been to Hong Kong, you'll know the idea of a deserted street is unheard of. If you haven't, you need to realise Hong Kong is a really busy city. One suburb, Mongkok, has the largest number of people per square metre of any place on the entire planet. This street (Tai Yip St, for the record) had no one on it. Deadly silent. Easily the creepiest street I have ever walked down in my life. 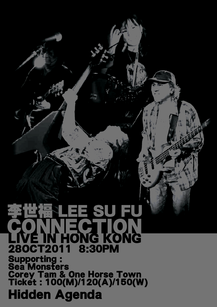 Halfway down the street there was the building where Hidden Agenda was supposed to be. It seemed completely shut, but a little sign noted that after-hours access to the building was via the back alley. So now not only were we walking down a deserted street in an industrial area we were now walking down a back alley behind the deserted street in an industrial area. There we found a massive industrial lift and a little note telling us Hidden Agenda was on the sixth floor. About halfway up we started hearing thunderous rock music. When the doors opened on the sixth floor, there it was: a small stage, a modest but vocal crowd and a bar that sold two kinds of beer (Corona and Tsing Dao, from memory)... and that was pretty much it.

The night that we attended the headline act was Lee Su Fan Connection, which I must admit we didn't stay for since it was late and we weren't sure when the trains stopped that night. We did see both support acts, Sea Monsters then Corey Tam and One Horse Town, and both were marvellous. I particularly loved Sea Monsters, who had an awesome female vocalist.

Hidden Agenda are friendly, distinctive, edgy and about as far off the traditional Hong Kong tourist route as you can get. If you're in town, I strongly recommend checking their website for gigs and hunting them down for yourself. You can currently find them at 2A, Wing Fu Industrial Bldg, 15-17 Tai Yip Street, Kwun Tong, but I'd check their website. (www.hiddenagendahk.com) before heading out - just in case the government's forced them to move once again.

Disability Access: There is a lift that gets you to ground level at the train station, although I can't comment on the disabled access at Hidden Agenda's new venue. (The old one was not a problem.)
Posted by Grant at 5:25 PM