Cool World: Bruce Lee and the Avenue of the Stars 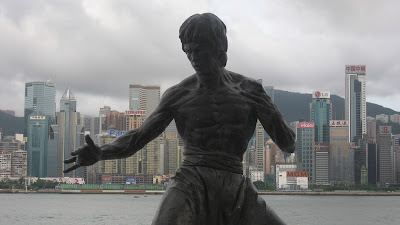 Running along the foreshore of Tsim Sha Tsui, Hong Kong, there's a tourist attraction known as "the Avenue of the Stars". It's basically Hong Kong's own version of the Hollywood Walk of Fame, with numerous cement sections of the pavement containing actors' signatures and handprints.

There are handprints by the world-famous (Jackie Chan, Jet Li), as well as many by actors probably not well known outside of Asia. It's a mild diversion in itself (Jet Li has astonishingly small hands), but it does feature two very cool highlights. Firstly there's the view of Hong Kong itself, which looks fantastic all lit up at night. Secondly, there's this fabulous bronze statue of Hong Kong's most famous screen icon, the late Bruce Lee.

It's a thing of beauty: an iconic pose, slightly larger-than-life, backed by a panorama rarely afforded to other bronze statues in other cities. It's the thing that lifts the Avenue of the Stars up from an OK, relatively tacky bit of tourism to something genuinely worth checking out. 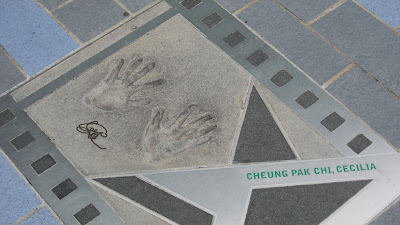 Getting There
I leave it to you to get to Hong Kong. Once there, this is closest to East Tsim Sha Tsui station on Hong Kong's excellent MTR. Be warned, it's quite a walk through the subway system from Tsim Sha Tsui station to East Tsim Sha Tsui. It's one of the strangest quirks I've seen in the world's subway systems - a bit where it's easily far enough between stations for there to be a train there, but they make you walk it instead. There's one I've encountered in Paris as well.

Of course it's relatively easy to walk the peninsula from the Tsim Sha Tsui ferry terminal around to the Avenue of the Stars, but be warned Hong Kong can get fairly hot and humid and there's not much in the way of shade. Those with movement issues or disabilities will likely find it (indeed, much of Tsim Sha Tsui) hard going.

This is the first in an occasional series of blog posts highlighting interesting things to look at if you go overseas on holiday. They're things I've been to myself, using my own photographs where possible. When travelling I am usually with my disabled wife, so I will be noting any mobility issues and the like when it's relevant. And really, if you're disabled, Tsim Sha Tsui is an absolute cock of a suburb.
Posted by Grant at 5:44 PM