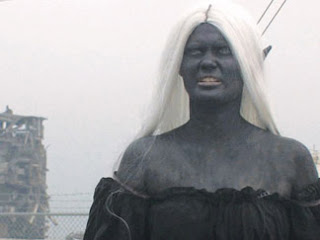 Scott Corum is a frustrated wannabe author seemingly trapped in a loveless marriage. Richard Meeks is an army reservist and nudist. Elizabeth Reesman is a World of Warcraft addict who likes to put on black make-up and a white wig and pretend to be a dark elf. All three are role-playing game enthusiasts, and all three form the subject matter of The Dungeon Masters.

The Dungeon Masters, from director Kevin McAlester, is a very difficult film to review. On the one hand it feels exploitative, because it grabs three enthused gamers and arguably makes a mockery of their lives. On the other hand, as the film progresses we can't help but become engaged in their personal affairs and hoping that all three will find happiness and fulfilment in their endeavours. In the end I find myself disliking the film but liking its subject matter - I'm not sure if that makes it worth a recommendation or not.

Role-playing games, typified by the likes of Dungeons & Dragons, are a fascinating pop culture artefact. I've played them myself, off and on, since the age of about 10. I've been feeling the urge to start playing them again of late. They're intricately designed, and they're remarkably performative - the interests that have led me to be a playwright and an actor are the same interests that have led me to play RPGs. A documentary about gaming - why we do it, what we get out of it, what they represent to us - would be a marvellous thing. The Dungeon Masters is not that documentary.

Instead it's a fly-on-the-wall peek at three gamers in the USA over the course of one year - basically the time between GenCon 2006 and GenCon 2007. All three are real people, and they're people I recognise. I'm very active in science fiction fandom, and the basic personality types come up all the time. I can't criticise the filmmakers for accuracy to the subculture. What I do feel the need to criticise is the manner in which the filmmakers represent Scott, Richard and Elizabeth. It feels voyeuristic, and veiled by mockery and disrespect. Scott, Richard and Elizabeth may be foolish people (I mean, black face? Really? That's a bizarre lack of awareness of the world around you) but the documentary actively invites us to consider them to be fools.

Scott is an aspiring novelist. We see him writing his lengthy first novel, and openly considered it to be a masterpiece. We also see him meeting with an agent, and learning that his novel isn't as good as he thought it was. The agent is almost certainly correct, because it's his first novel and writing fiction is really hard. The scenes are constructed, however, to actively show Scott's hubris and then a subsequent taking-down. It makes him seem deluded, when in fact he's almost certainly what he is - an ambitious and creative man trying to write his first novel.

Similarly, Elizabeth - who does spend the majority of her time on screen in costume as a dark elf - seems ridiculously out-of-touch and more than a little foolish. I find myself questioning how she is represented, however: is she as the film portrays her to be, or is she being deliberately represented in a way that will be more entertaining to a film-going audience?

Richard I have less of a problem with, except that he seems a really mean gamesmaster. I'm not sure I'd want to be a player in any of his campaigns.

The Dungeon Masters is an interesting movie, but it's not a good one. Its heart is in exactly the wrong place. It's one of those films that seems worse than it is, because while it's an underachiever on its own merits it also points to a much better, far more interesting film that could have been made about the same subject matter. A better film that would have treated its subject matter and characters with a small amount of respect, rather than belittling them as a geek/nerd freak show.
Posted by Grant at 10:50 AM