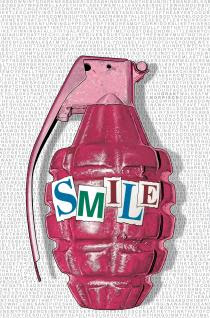 Before getting onto the comics I did buy this week, I do want to give a shout out to the most idiotic book published by a comics company this month. It's something that, with one tweak, I would have purchased without hesitation. As it stands, it's driving me up the wall.

I'm talking about DC's publication of Grant Morrison's The Invisibles in hardcover format. In one volume. That's right, 59 issues of the comic - the complete three-volume run - in one volume. More than 1,500 pages. How am I supposed to read that book? It's the size of a church Bible. You can't read it easily in bed, lying on the couch, on a train- I'm not sure you can read it anywhere other than at a desk or table like it's an university textbook.

I can't stand these ridiculous 1,000+ page omnibus editions that DC and Marvel keep releasing. They're too heavy, too unweildy, they look terrifyingly close to snapping their spines every time they're opened, and they look ridiculous on the shelf.

I'd buy a hardcover edition of The Invisibles if the 59 issues were split across, say, five volumes. I'm buy the absolute hell out of those books. You could put one of each of the five main characters on each cover. It would look great. The omnibus edition just looks ridiculous and unreadable. It's on sale from next Wednesday if you're completely insane.

Under the cut: Batman Beyond, Batwoman, Daredevil, Legion of Super-Heroes, The Massive, Pathfinder, Revival, Saga, The Shade, Wander: Olive Hopkins and the Ninth Kingdom and Wonder Woman.

While a lot of attention among Batman fans has been focused on Snyder's Batman and Williams and Blackman's Batwoman (and rightfully so), Adam Beechen and Norm Breyfogle have been quietly producing this outstanding digital title. Batman Beyond was an excellent animated series, and I've really been enjoying how this comic has adapted the elements from the show and grafted in elements more in line with the DC Universe. This issue brings a lot of plot threads to a height, and gives us a really strong direction to head off in. To be honest all three of the digital Beyond titles are worth picking up: this is the best of the three, but Superman Beyond and Justice League Beyond are absolutely worth checking out. (3/5)

Batwoman continues to impress, and to be honest I'm running out of superlatives to use with this comic. The key appeal is definitely J.H. Williams III's innovative and dynamic panel layouts, first developed for Alan Moore's Promethea and which give Batwoman an utterly unique and eye-catching look on today's comic shop shelves. This issue launches a new storyline with a guest appearance by Wonder Woman, which is a character Williams draws like a dream. Wonder Woman dovetails nicely into where this comic has been progressing: Batwoman's been chasing after a criminal mastermind named Medusa, but what if Medusa an actual gorgon and not a human after all? My only criticism of this comic is that it can be a little slow in some issues, but with art and layout this pretty, it's not the drawback that it could be. (4/5)

Regular Daredevil artist Chris Samnee has the month off this issue, and his one-time-only replacement is comic book megastar Mike Allred! I've been looking forward to this issue for about two months, because I'm an enormous fan of Allred's work. Mark Waid has written a perfect one-shot story for him as well, presenting a flashback to the early days of Matt Murdock and Foggy Nelson's friendship and an encounter with the villainous - and completely ridiculous - Stiltman. Laura Allred's colours really help this comic pop off the page. (4/5)

I've made it through a whole year of DC's Legion of Super-Heroes, perhaps the most cast-filled, continuity-rich, hands-down impenetrable superhero comic on the market. It's a comic with about 20,000 hardcore fans that have been reading it for years, and instinctively know the difference between Cosmic Boy, Lightning Lad, Radiation Girl, Ennui Woman- OK I might have made the last one or two up, but the number of characters seems so irrationally extended that they probably do exist. Maybe in the 1980s issues. It's enjoyable stuff if you just go with it, and Paul Levitz does a good job of giving the different characters very distinct personalities. I'm also immersed enough to have a favourite: Braniac, or "Brainie" as his pals seem to call him. He's basically the Kerr Avon of the group. (3/5)

I finally got a copy of this - I should have reviewed it last week. This closes up the first storyline in Brian Wood's ocean-based post-apocalyptic science fiction series. It's quite a clinical book so far, with plenty of descriptive captions and backstory and a very intriguing premise, but lacking in character and warmth to a certain extent. I'm enjoying the hell out of it, but it's probably a love-hate kind of a book. I can see a lot of readers finding it a little boring or dry. Kristian Donaldson's art is very well suited to the book's very specific cadence, however. Any science fiction fans looking for a comic (who aren't already buying Saga) should take a look. (3/5)

Pathfinder is a role-playing game, based closely on the third edition of Dungeons & Dragons. For my money it's one of the best fantasy RPGs out there and Paizo Publishing have done a brilliant job with it. This is the spin-off comic book, published by Dynamite and set in the fantasy world developed for the game. It's exactly what you'd want from an RPG-based comic: there's a party of adventurers with a wizard, a fighter, a thief and a cleric; there's a dwarf, an elf and a brawl in a tavern; there's an attack by goblins. The art by Andrew Huerta matches the general aesthetic of the RPG, and Jim Zub's script - while hardly original - is breezy and entertaining. Best of all is the raft of character sheets and roleplaying supplements at the back of the book. Not only can Pathfinder fans read a fun fantasy adventure, but they can play as the characters and visit the locations in their own game. (3/5)

The second issue of Tim Seeley's slow-burn horror comic doesn't disappoint. For those who came in late, Revival follows what happens when the dead of a small Wisconsin town start coming back to life - not as zombies or vampires, but just as the walking, talking dead. I think this may be one of the most promising new titles of the year. More characters are introduced, and the bizarre situations begin to sink in a little better. Mike Norton's art is incredibly good and effective. This is yet another top-notch comic that continues to demonstrate why Image has replaced DC Vertigo as the place to go for smart, dark, adventurous comic books. (4/5)

Speaking of smart, dark, adventurous comic books, Saga reaches its sixth issue and I have to say this is the best continuing comic book of the year for me. I know we've still got a few months left, but I honestly can't see anything coming out and making a debut as earth-shatteringly good. Crazy ideas and imagery, humour, adventure, science fiction, and wonderfully observed and realised characters. Brilliant artwork. The first six issues are re-released next month in an ultra low-priced (US$9.99 from memory) trade paperback, which gives you no excuse not to start reading this exceptional series - and if it doesn't win Best Graphic Story at the 2013 Hugo Awards, then the WSFC needs to dump that category for good on account of not knowing what they're talking about. (5/5)

James Robinson's 12 issue Starman spin-off limps towards its conclusion. This has been a weird series. It's a spin-off from a comic that hasn't been published for some years, following the adventures of a supporting character and former villain. It's been changing artists every few issues, and has been broken down into three three-part stories separated by one-shot flashback stories. Now the art has been exceptional, and a lot of the ideas have been great, but it's been a really difficult comic for me to engage with. The middle storyline, set in Spain, was a decent enough superhero story, but it's been book-ended by very slow, vague stories that haven't really grabbed my attention. The situation's made even worse by the Shade himself, a laconic gentleman who seems positively disinterested in his own adventures. The final issue in September tells the character's origin for the first time - I kind of wonder if that is the only issue DC needed to publish. (2/5)

Monkeybrain have been launching a flood of digital-only titles onto the market in the past few weeks. Bandette has been the standout for me so far, but Wander is definitely worth a look. It follows disgruntled Korean-American grad student Olive Hopkins who falls asleep drunk one night and wakes up with a hangover in the fantastical Ninth Kingdom. I think the comic primarily exists for Kevin Church (The Loneliest Astronauts) to poke fun at fantasy conventions, but that's not necessarily a bad thing. Grace Allison's artwork feels very webcomicky, if I'm able to invent that word, but it expresses the narrative cleanly through a rigid six-panel layout that works very well on digital comic readers. The book is worth it alone for Olive's reaction to the dark-skinned stranger from the southern lands. (3/5, available at Comixology)

Azzarello's take on Wonder Woman has been a bold change from the beginning, combining a very mature Vertigo-esque take on the character with some great but atypical art from Cliff Chiang. In the 12th issue we see the first major story arc wind up nicely while aiming the book towards the next stage. There are quite a few surprises in here, as well as a final page that - for many DC Universe fans - will have their jaws on the floor and crawling up the walls for issue #13 in October. I've said it elsewhere, but alongside Batwoman and Batman this is one of the best books DC is publishing at the moment. (5/5)

Winner of the Week: With its climactic content, and not one but two surprises in the last three pages, it has to be Wonder Woman #12.
Loser of the Week: With some regret, I have to admit it's The Shade #11. I love Starman to bits, but this simply isn't anywhere near as good.
Posted by Grant at 5:18 PM