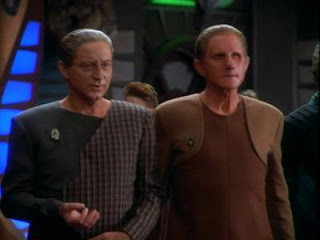 Odo receives a visit from Dr Mora, the Bajoran scientist who first examined him. Mora thinks he has located a planet in the Gamma Quadrant with similar lifeforms to Odo, so together they embark on an away mission to test Mora's theory. The mission ends in a medical emergency, leading to a mysterious and violent shapeshifter lurking in DS9's ventilation system.

Odo receives a key piece of backstory here with the introduction of Dr Mora. He's a nicely ambivalent character, so full of affection for Odo however it's a form of affection that leads us to think he considers Odo more of a pet or scientific experiment than a sentient being. Odo's opinion of Mora is similarly conflicted: he resents the doctor for treating him like an experiment, yet at the same time Mora is the closest thing Odo has to a parent. It's fertile ground for drama.

Sadly the episode never quite exploits this fertile ground in the manner I felt it should have. Character-based conflict soon gives way to a bit too much monster hunting and technobabble. It's a common flaw in post-Next Generation Star Trek. The window dressing often outweighs what's behind the window. This doesn't make "The Alternate" a bad episode, but it does make it a slightly disappointing one. From memory I think Dr Mora only returns once more around Season 5, so this episode really is a missed opportunity to explore the character.

One element I did really appreciate was how similar Mora looked to Odo. It's obvious that Odo has based his humanoid appearance on him, but the script cleverly never stoops so low as to point this out. A lesser series would dedicate a whole scene to the similarity.

There are some very nice character moments on the fringes of this episode: short conversations between Sisko and Odo, Sisko and Jake and Bashir and Dax, all of which continue to develop and strengthen the relationships in this series. For me it was the edges of this episode that made it worthwhile, rather than the central storyline. Still, as I've said above, it remains an enjoyable enough episode and certainly of sufficient quality to be considered worth watching. That makes nine good episodes out of 12: that's a season-so-far score of 75%.
Posted by Grant at 9:36 AM