Right now I'm reading a hell of a lot of comic books, and while I co-host an excellent comic book podcast that I'm certain you all listen to, I usually only talk about maybe two or three books every two to three weeks. So if I can keep up, I'm going to start blogging short, snappy reviews of all the books I've been reading each week. Let's start this week, with 10 comics published in the week of 1 August 2012.

At some point I need to go back and re-read this entire run of Grant Morrison's from the beginning, because I realised reading this 12th issue that I am hopelessly lost. I have no idea what on Earth is happening in this comic any more. It was bad enough when the initial Brainiac-based story arc kept getting bumped for weird fill-ins about people from the future and a black President Superman, but now it feels like so many concepts and storylines are being thrown around that I can't tell up from down any more. I'm a big Morrison fan, but this is very far from his best work - maybe it will pull together in the end, but with only five issues to go with him in the writer's chair I have my doubts. (2/5)

I've been enjoying Jeff Lemire's run on Animal Man a hell of a lot, and in this 12th issue he finally meets up with Swamp Thing, something the comic has been working toward since last September. That's actually my biggest criticism: it's taken ages to reach this point. It's probably going to read much better in trade paperback form than single magazine format. That said, the meeting of the Red and the Green is pretty darned awesome - I haven't been keeping up with Swamp Thing on a month-to-month basis, and the crossover hasn't made it difficult to follow at all. Steve Pugh's artwork continues to impress. This is more old-school Vertigo than anything currently published by Vertigo. (3/5)

I continue to have a soft spot for this comic, based around the 'Batman of Africa'. It's on the most part been an enjoyable read, although the initial arc (now available in the first trade) remains the strongest in the series so far. This issue is the conclusion of a storyline that brings in Nightwing and Justice League International to help Batwing against a super-powered dictator. It all feels a little bit rushed, to be honest, although I did love the slightly meta scenes of the JLI mourning their own cancellation. (2/5)

Mark Waid's miracle run on Daredevil continues. Over the past year it's been pretty much an even contest between which Marvel title has been the best: Daredevil or Ultimate Comics Spider-Man. This issue, the first with Chris Samnee as regular artist, guest stars Iron Man, Dr Strange and Ant-Man as they struggle to save Matt Murdock from the virus that is shutting down all of his senses. It's brilliant, imaginative stuff, and wraps up another storyline in an inventive and gripping fashion while opening a door on the next challenge in Daredevil's way. This really does seem to be one of those books that can do no wrong. (5/5)

Tony Daniel's run as writer/artist on Detective Comics ends this issue, I believe. It's another conclusion issue, like Batwing, and to be honest it's a lot better than this comic has been of late. Personally I feel Detective has been misfiring constantly since it started last September. Daniel still has a lot of appeal as an artist, but his writing skills are still lacking. He's sometimes good, as he is here, but all too often he's simply not up to scratch. As I said though, this issue's quite a bit better than it has been. (3/5)

Matt Fraction and David Aja, who made a big impression a few years back on Iron Fist, reunite to give Clint Barton (aka Hawkeye) his own regular solo comic. It's exceptionally good: distinctive, expressive artwork, great characterisation, and a done-in-one plot that makes this a worthwhile read even if you don't want to pick it up every month. That said, after reading this first issue I'm pretty sure most readers are going to want to continue. This is hands-down the best comic of the week. My only regret is that this now leaves Black Widow (aka the girl) as the only character from the Avengers movie who doesn't get her own book. (5/5) 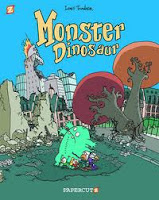 You can't go wrong with Lewis Trondheim. To my mind he is the single-best French comic book writer/artist since Moebius: very different stuff, but a near-unparalleled talent. Monster Dinosaur is beautifully presented by Papercutz, replicating the traditional French format of a 32-page hardcover. It's a children's story, and stylistically closer to a picture book that a comic, but if you have kids and you're looking for something cool to read with them you can't miss it. It's not as exceptional as Trondheim at his height (Mister O still stands as one of the best graphic novels of all time) but it's pretty damned fantastic nonetheless. (4/5)

Stormwatch is the quality yoyo of the New 52. It started off with an unfocused, uncharacteristically poor run written by Paul Cornell, then picked up, then dropped off with the start of Peter Milligan's run, and has now picked up again. I'm finding it hard to cope. I came to this book cold, having never read the original Stormwatch comics, and found it very hard going. It's eased up quite a bit, but truth be told this book is still pretty hard going. This issue appears to write out the Martian Manhunter, who was the character I was sticking with the book for - so this may be curtains for me reading Stormwatch for the time being. (3/5)

According to the cover, this is part of some Ultimate Universe-wide crossover, but you wouldn't tell from the actual comic. This instalment is pretty much entirely about the emotional fallout from issue #12, and that's no bad thing. One of the best parts of Ultimate Comics Spider-Man is the attention Bendis is giving to Miles Morales' personal life, and conflicted emotions about his journey to becoming the new Spider-Man. It's a slow-paced comic, but it's slow-paced for genuinely good story reasons. It continues to be one of my favourite regular superhero titles, along with Daredevil and Batman. (4/5)

Paul Levitz continues to write the hell out of this book. I'm a big fan of how they're presenting the art in this title - George Perez is handling the present-day superhero shenanigans while Kevin Maguire's expressive style is being used for the more character-based flashbacks. This closes off the first storyline, and has pretty much ensured I'm reading this comic for the long haul. (I still don't like Power Girl's current costume, though.) (4/5)