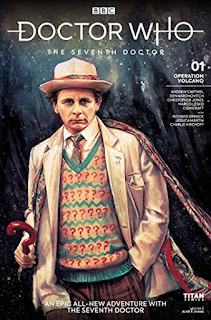 In 1967 Australia, a crashed alien spacecraft is uncovered in the middle of the Maralinga nuclear test site. 60 years later, a satellite clean-up mission in Earth's orbit discovers another spacecraft drifting in space. What is inside that ship links both time periods, but it will take 1967's Group Captain Gilmore, Allison Williams and Professor Rachel Jensen - along with the Seventh Doctor and his companion Ace - to find out how and why.

Titan Comics' range of Doctor Who tie-in comics returns with revised trade dress and a new three-issue miniseries featuring Sylvester McCoy's Seventh Doctor. Let us not beat around the bush: this is hands-down the single best issue of Doctor Who that Titan has published to date. It is smartly written by McCoy-era TV script editor Andrew Cartmel, giving it an immediate authenticity and pitch-perfect tone. It is being published in extra-length issues, allowing for more plot per issue - and that really helps. Christopher Jones' artwork is exceptional, and captures the TV characters perfectly - and it's more than just the Doctor and Ace, since Gilmore, Williams and Jensen all return from Ben Aaronovitch's 1988 TV serial "Remembrance of the Daleks". It's a welcome return: they always seemed like they should have returned on TV.

A back-up strip sees the Doctor and Ace revisit the Psychic Circus and the werewolf Mags - a strip made oddly special by the artist being Jessica Martin, the actress who play Mags on television in "The Greatest Show in the Galaxy". Her art is not outstanding, but it's a cute touch. It's all just a bonus, however; the core storyline is essential for any discerning Who enthusiast. (5/5)

Following on from the DC Nation preview: Batman and Catwoman are getting married, and the Joker wants to know why he hasn't received his invite. He's come to church with a gun and a rising bodycount. Tom King has a real skill for writing an entire issue out of a single scene - it's something he's done in the past, and it always seems to deliver a strong story with great dialogue and character insight. It's no different here: he absolutely nails the Joker, making him both funny and terrifying. Thanks to Miken Janin's art and June Chung's colours, it also has a fabulous detailed and very traditional look. This is a great Batman comic. (5/5)

Another month, another Marvel ongoing series getting relaunched and renumbered. With the experiment to renumber all books back to their legacy numbering apparently failing, Doctor Strange returns with a new issue #1 by Mark Waid and Jesus Saiz. It's a very different style of Strange to what readers have had for the past few years: much more realistic, painterly artwork, and a very literary narrated storytelling method. Oh, and it's also a science fiction story now with Stephen Strange heading into deep space to rediscover his magical powers. I'm not sure how that will go in the long-term, but as a sharp change in direction it's pretty effective stuff. (4/5)

The second arc of Scales & Scoundrels finally delivers on an explanation and back story of Luvander, the irrepressible protagonist of this high fantasy series. We already knew that she was a dragon disguised in human form; now we get to learn why she travels in humanoid form, and the place of the dragons within this world. It's perhaps a little drier than usual as a result - the issue exists to deliver information rather than tell a story - but it's still a great mix of character-focused writing and simple, elegant artwork. The series returns in August; I'm counting down the days. (5/5)

It seemed as good a time as any to check in with IDW's all-ages Star Wars anthology series and see how it was going. Unsurprisingly given the recent cinema release of Solo: A Star Wars Story, this issue splits its time between Han Solo and Chewbacca in one serial and Lando Calrissian in the other. The action has a fast pace, the tone is breezy, and the stories are uncomplicated. For adult fans it's never going to come close to Marvel's generally good output, but for younger readers this seems like an excellent gateway drug. The Solo story in particular works wonderfully. (3/5)
Posted by Grant at 12:10 PM