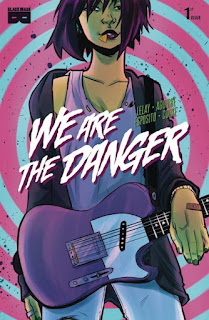 Senior high schooler Julia Malliari gets dragged out to a rock concert by a girl named Tabitha - only to discover that Tabitha is the band's drummer. When Tabitha breaks with that band, she and Julia decide to form one of their own.

I have quite a soft spot for Black Mask, an independent publisher who seem prepared to take a punt on early career writers and artists and give them a major career break. It's a strategy that can lead to mixed results, but to the credit their books are always varied and interesting.

We Are the Danger comes from Fabian Lelay (Jade Street Protection Services) and is an engaging but superficial first issue. It certainly tells an amiable story, but beat by beat it feels too derivative to make a proper impact. Anybody who has read IDW's Jem and the Holograms revival will be on overly familiar territory. It is also annoyingly superficial: the potential for a proper indie rock comic series is huge, but so far Lelay simply isn't capturing it. Future issues may expand or change the story direction, but for now this is a little too unremarkable to get worked up over. Lelay's artwork still struggles a little as well, although Claudia Aguirre's colours bring it capably over the line. If you're after a pleasant comic book with female leads, check it out - but keep your expectations measured. (3/5)

We Are the Danger #1. Black Mask. Story and art by Fabian Lelay. Colours by Claudia Aguirre.

Under the cut: reviews of The Crow: Memento Mori, Doomsday Clock, Green Arrow, Harbinger Wars, and Vs.

The story of David Amadio, murdered and then returned to life to enact revenge against his killers, is a nicely illustrated and written Italian variation on James O'Barr's original Crow comic. This third issue is particularly high on beautifully staged and drawn action, with an awful lot of blood and brutal violence. It is illustrated with big panels, however - usually three to a page - and that makes it a very quick read. I honestly think it would have worked much better published all at once in its own collected edition. Certainly that is the format I would recommend tracking in down in. A short back-up strip is honestly both tacky and terrible, but thankfully it is easily skipped over. (3/5)

DC's ludicrously delayed maxi-series limps to a fifth issue. To its credit, this is a much stronger chapter than a few of the earlier ones, and really pushes forward the anti-superhuman sentiment that is building globally. Batman's encounter with Adrian is also strong stuff. On the other hand, it's clear this isn't so much a Watchmen sequel as an exercise in relaunching both the Legion of Superheroes and the Justice Society of America. DC may have sold this as the follow-up to end all follow-ups, but really it's a marketing exercise. Great art though. (4/5)

In the last column I noted how rushed Justice League: No Justice felt. A little of that rush could have been alleviated by incorporating this tie-in one-shot into the main series. It does itself no favours here, exploring Green Arrow's activities leading up to the beginning of No Justice, thus leaving it without a proper ending of its own and an epilogue between Green Arrow and the Martian Manhunter that would have been more suitable in No Justice #4 instead. It's solid stuff, but being formatted this way was simply a terrible idea. (3/5)

A string of powerful super-humans collide in Valiant's latest four-part crossover event, including X-O Manowar returning to Earth, a secret military contractor named Omen tracking down and eliminating rogue psychics, and the powerful heroine Livewire taking up international terrorist to stop it. This feels hugely reminiscent of a lot of older event series from Marvel and DC, but in typical Valiant style it is neatly written and nicely illustrated in a very straightforward and immensely readable fashion. As a crossover event it's probably a little too 'inside baseball' for new readers, but anyone familiar with the Valiant characters is going to find a lot to enjoy. It's rock-solid popcorn entertainment. (4/5)

Satta Flynn is back in action again, rebuilt over and over as the constant gladiatorial war keeps destroying his body. This issue is the strongest so far, dominated by a lengthy and destructive battle sequence - once again framed as televisual entertainment for the masses. Esad Ribic's artwork is beautifully evocative and detailed, while Nic Klein's colours ensure it all pops vividly off the page. The only drawback is Ivan Brandon's script: while broadly very effective, it has spent much of the series keeping the characters at arm's length - and that soften some of the emotional blows that get landed by the plot. Despite that, this is still a very enjoyable and beautiful read. (4/5)
Posted by Grant at 9:49 AM