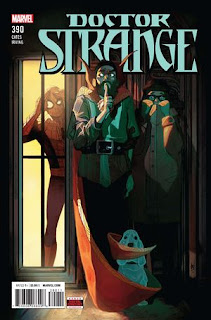 About a year after he started, Donny Cates' run as writer on Doctor Strange comes to a sudden and unwanted end. With sales continuing to decline across Marvel, desperate times have apparently called for panicky measures. For Doctor Strange that means abandoning its recent renumbering to align with its original run, and with only 10 more issues left before its 400th issue I fully anticipate that Mark Waid's incoming run will get launched again to meet it.

Still: issue #1 is still a few weeks away, and issue #390 is here as a welcome and rewarding epilogue to both the Cates and previous Aaron run. There is an unfinished conversation with companion Zelda to be had, and - in a flash of pure comic book brilliance - an unexpected encounter with Spider-Man.

Frazer Irving's art and colours are sublime and emotionally superb, but it's the weird interruption by Peter Parker that absolutely nails the issue. It's gut-bustingly funny stuff, including a two-page segue illustrated by Chip Zdarsky, and provides the perfect contrast to the more thoughful conversation in the rest of the book. This has been a fine run for Doctor Strange, and it's a shame to see it end. (5/5)

A space mission into the asteroid belt uncovers an enormous asteroid that is not registered on any charts. Caught unawares, the crew direct their ship into a maze of caverns and tunnels riddling its surface to avoid crashing. Steve Niles returns with his superb ability telling horror stories in comic book form. Based on the first issue, this new series has Alien and Event Horizon down perfectly, and seems a decent companion to comics of recent years including Nameless and Southern Cross. Nat Jones' artwork has a wonderfully distinct scratchy style, one accentuated by a limited but luminous colour palette akin to former Niles collaborator Ben Templesmith. It's a promising but - thus far at least - overly familiar package. (3/5)

Now that we're three issues in, the strengths and faults of this four-part miniseries have become patently clear. On the plus side, it juggles a lot of disparate characters to generate some inventive humour and character insight. On the negative side, there are simply too many characters: the book is rushing from plot point to plot point without sufficient room to flesh anything out. It's like a Cliff's Notes version of a comic book. This issue particularly suffers from being split between two artists: I'm a big fan of both Riley Rossmo and Marcus To, but their aesthetics do not remote match. It makes for a disjointed read. (3/5)

Mera and Orm must defeat a giant monster octopus to earn the right to speak with the King of Xebel - the rival undersea nation that Mera betrayed when she fell in love with Aquaman. There's a lot more story momentum going in this issue compared to the last, and a welcome return to the courtly intrigue where Aquaman often tells its best stories. This remains fairly average stuff - a by-the-numbers story, and competent but uninvolving artwork - but it does certainly scratch a particular itch, and gives an overdue focus to one of DC's more underutilised characters. (3/5)

The retelling of The Force Awakens continues, and it continues to be a weirdly awkward and mediocre story arc. It feels like Poe Dameron should have wrapped up back at issue #25, which brought the story right up to The Force Awakens' doorstep. Instead we're getting a combination of awkward post-Last Jedi conversations between the movie leads on the Millennium Falcon, and flashbacks to things we didn't see Poe and his crew do during the earlier film. The thing is: we didn't see these things back in the movie because they honestly weren't interesting enough to include. That doesn't change just because it's being told in a spin-off comic. With the Star Wars universe so rich with character and story options, Marvel needs to close this one down and replace it with something more exciting. (2/5)

Jack Boniface is once again back in the underworld dimension of Deadside, and headed for a face-to-face with Baron Samedi himself. In all honesty I've never particularly warmed to Shadowman as a character. There's something about the whole voudoun/Samedi angle, generally written and illustrated by a succession of white people, that hasn't sat well with me. It's never really grabbed me either, and in all fairness - and despite some nice artwork by Segovia and Polina - it isn't grabbing me here. I love so much of Valiant's output, but this one simply isn't grabbing me. (2/5)

Another DC Comics monthly wraps up, with the conclusion of Robin and Superboy's adventure against Kid Amazo, and the Justice League's lives hanging in the balance. There is so much fun in the pairing of broody Damian Wayne and optimistic Jonathan Kent. It's a wonderful exaggeration of their respective fathers, and has led to numerous great moments over the course of Super Sons. Thankfully it seems that Robin and Superboy will return later in the year - I'm guessing it will be via a Teen Titans rejig - but for now it's farewell to this regularly fun title. (3/5)

As a palette cleanser following Aric's 14-issue epic as an intergalactic slave, rebel leader, and king, Valiant jumps all the way back for an exploration of Aric's younger days on 4th century Earth. A split narrative bounces between Dacia and Zambia, and between young Aric and an African slave. It is a nice contrast, given the complete lack of superheroes or alien technology. Instead it is simply a story of a slave breaking free from his chains, and the son of a chieftan rebelling to rescue a friend. Like so many Valiant comics, it's strong, well-illustrated and hugely entertaining comic book entertainment. (4/5)
Posted by Grant at 6:40 PM