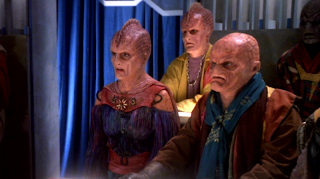 The episode's subplot, in which Talia Winters gets confused monitoring a business exchange between Kosh and Abbut, is simply tedious to watch. It's clearly intended to be quite humorous, however the jokes fall very flat. Cosie Costa plays the mysterious Abbut, who wears a ridiculous hat and boasts an annoying personality. It's a relief he never returns, as he's one of the least watchable characters in the series so far. The worst part of the sequence, which is only apparent much further into the series' future, is that the whole plot thread is a set-up for an episode that never actually happens: Andrea Thompson quit the series before they reached it.

Ultimately "Deathwalker" feels like one of those Babylon 5 episodes that's written like bad Star Trek. I wish I could claim it had some silver lining, or brief aspect of merit, but it's sadly not the case. This episode is straight-out awful from cold open to denoument - and that leaves us running at three good episodes out of nine, or 33%.
Posted by Grant at 8:22 PM