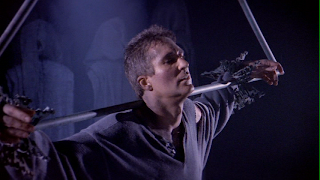 The episode is also a fairly obvious homage by J. Michael Straczynski to the surreal 1960s drama The Prisoner. There is an episode in that series, "Once Upon a Time", in which the nameless protagonist is forced through an increasingly strange one-on-one interrogation to seek the answer to a single question. We're faced with the exact same situation here, with a few key differences. Most significantly, in The Prisoner Number Six refuses to answer the question (why he resigned), whereas in Babylon 5 Sinclair simply cannot remember what happened during the battle that led to the Minbari surrender.

As a homage to The Prisoner it is recognisable but unexceptional. As an episode of Babylon 5 it actually jars a little. I'm not sure why. I think it's too busy being cute with evoking The Prisoner that it forgets to be a decent commercial hour of TV drama in its own right. One of the characters even quotes the show.

When I originally watched the series back in 1994 I remember this being one of the "good ones". Maybe it's time; television has become much more sophisticated in the past decades, after all. On the other hand maybe this episode simply isn't that great, and it's importance to the overall story arc makes it feel more necessary that it really is.

I'm giving this one the "no" vote. Unfortunately if you want to fully follow the story arc, you probably need to watch it. And that's sad, because more than anything else it's just a little bit obvious and dull. And that makes Babylon 5 hit three out of eight, or 37.5%.
Posted by Grant at 8:39 PM