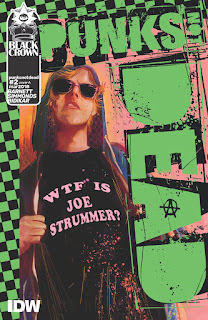 Feargal Ferguson was finding high school hard enough without being haunted by the ghost of Sid Vicious. Now he's developing strange powers due to proximity with the dead punk rocker. While Fergie deals with those problems, Britain's Department of Extra-Usual Affairs are on the case of another haunting: former government minister John Profumo.

Punks Not Dead is a wonderful throwback to the classic DC Vertigo comics of the mid-1990s, only this time it is published by Black Crown, the new IDW imprint edited by former Vertigo head Shelly Bond. It's a scabrous mixture of sex, foul language and comedy, with a nice line in referencing punk music without overwhelming the story with it.

Martin Simmonds' artwork is excellent, and Dee Cunniffe's colours make excellent use of the book's soft inking to give it a distinctive and appealing look.

With books like this, I really hope Black Crown finds a strong and productive niche in the American comics market. Shelly Bond is a tremendous editor, as evidenced by Punks Not Dead, and this new endeavour really does deserve every success. (4/5)

Deadman heads to Nanda Parbat to find Ra's al Ghul, leading to a battle in the snow with Deadman, Zatanna, Dr Fate, and the Demon fighting against trolls, robots and zombies. Neal Adams really does throw everything against the wall in his recent work, and while there is a certain glee in reading about a bunch of DC Comics second-stringers fighting zombies it isn't adding up to a very coherent or satisfying story overall. It also does not so much end as stop in mid-scene. Basically it's an act of nostalgia, both for a legendary writer and artists and for his readers. (3/5)

The Inventor is trashing New Jersey with the help of three giant cyborg monsters. Kamala's friends have banded together in her place, and have summoned Captain Marvel to help - but where is Ms Marvel? It's the climax of the four part "Teenage Wasteland" arc, so it's a pretty safe bet we're about to find out. The breezy bits and smart and funny, the dramatic moments pay off, and the characters are a delight. The art and colours are, as always, wonderful. Like Usagi Yojimbo, this book is one of the safest bets in American comics. (4/5)

Another issue of Southern Cross makes it out into the wild, this time with artist Andy Belanger taking over scripting duties from writer Becky Cloonan. He over-writes - for a science fiction horror book there is a bizarrely large amount of dialogue and narration. Occasionally it threatens to overwhelm Belanger's own art. To be honest this third arc feels like a bit of a mess: it's lost focus and has become rather hard to follow exactly what is going on any more. The regular delays in publication do not help. (2/5)

I missed Super Sons last month, and so this month it's time for a double issue catch-up. Both Jonathan and Damian are attending an exclusive Metropolis private school, which is a weird creative choice given that DC Comics just gave up on trying to make Gotham Academy a success - having two popular teen superheroes in the cast might have helped. What's more exciting is that Talia al Ghul is on the scene, with a mission to assassinate Lois Lane. That's right, the Super Sons are on the case to save one of their mothers from the other mother. Tomasi deserves praise for that on a conceptual level alone. This is fast, bright entertaining stuff - even if the cover to issue #14 completely lies. (4/5)
Posted by Grant at 3:38 PM