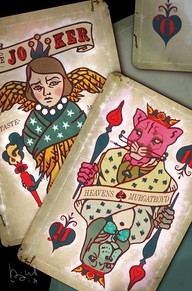 As his appointment approaches with the House Un-American Activities Committee, closeted gay playwright Snagglepuss struggles with his friends, his lover and his increasingly unhappy wife.

Police brutality, gay-bashing, identity crises, the tension between art and commerce, cold war paranoia, anti-communist crusades - these are all powerful and worthy subjects to cover in a 1950s period drama. That they're being expressed through a post-modern remix of Hanna Barbera cartoons just makes it deeply weird and unsettling.

It feels as if it shouldn't work, and every issue seems to put more pressure on top - how ludicrous can it get and maintain an authentic sense of drama? So far so good: this is the most surprising book of the year so far. Mark Russell's script is smart, literate and self-aware. Mark Morales and Mike Feehan's art and colours are unusual but effective. This book is just so strange - and strangely wonderful. (4/5)

Under the cut: reviews of Batgirl and the Birds of Prey, Demigod, Mech Cadet Yu, Monstro Mechanica, and Sonic the Hedgehog.

Batgirl and the Birds of Prey #21

Several former story arcs seem to be folding back and enveloping the Birds of Prey. Like all ongoing DC books of late, this really feels like a climactic finale to the run; I would not be surprised to see the Bensons and artist Roge Antonio moving on and getting replaced within the next few issues. Events in this issue build with a strong sense of momentum, as the Calculator brings several other super-villains to bear on the Birds - unless they give up Oracle's identity once and for all. The pace is great, the art is strong, and the story is straight-up great superhero crime-fighting. (4/5)

I am assuming that Demigod is supposed to a parody of bad 1990s comics, because if it has been created with a straight face and honest intentions I have to warn it's an incredibly awful book. The story is trite, with a banal superhero origin story. The artwork looks like the worst kind of overly muscular and exaggerated second-string early Image stuff. I honestly have no idea who this comic book is for. The characters are all stereotypes. The attitudes to gender are woefully out-of-date. It's all just jaw-droppingly terrible. (1/5)

The Sharg's latest weapon may spell doom for the planet Earth - unless the cadets can do something about it first. There's rebellion in the ranks as the  military command looks to cannibalising their mechs to make a super-weapon of their own. This has a fast pace, great action, high drama, and a bunch of hugely satisfying moments. It pays off a lot of development in the first seven issues, and pushes the story to what feels like a grand climax. Takeshi Miyazawa captures the action very well. (4/5)

With the siege concluded, and Leonardo's robot revealed to his masters, the time has come to engage the automaton in some controlled tests. Meanwhile Leonardo's apprentice Isabel continues to struggle with what seems to be the machine's emerging self-awareness. This is not an individually striking issue, but it pushes the plot forwards effectively and rounds out the characters a little more. The more issues of this book I read, the more I'm liking Chris Evenhuis' art style: realistic in a sort of Jamie McKelvie fashion but with aggressively thick borders to the individual characters. It's an eye-catching and effective look. (4/5)

This new first issue is a pretty big deal for Sonic the Hedgehog fans: Archie Comics produced a range of Sonic comics books for almost 300 issues over 24 years, before losing the license to IDW. Now we get to see how this new take goes. It's bright and breezy, but clearly aimed for children. That's a good thing: there aren't enough all-ages books on the market, and there is certainly a good niche for this sort of colourful videogame tie-in. Adult fans of the character may find it a little simplistic, but it's worth keeping in mind that it isn't for you. (3/5)
Posted by Grant at 2:00 PM