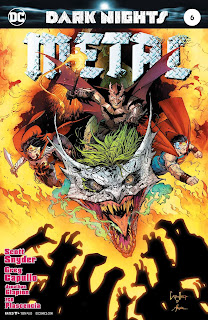 Snyder cracks the DCU wide open again in the latest in DC's periodic soft relaunches. It isn't a reboot in any sense, but it widens the universe for new characters and stories, and sets the stage for some re-arrangements across the various monthly titles. It's also kind of nuts, and is the most 'out there' and ridiculously over-the-top miniseries since Morrison's Final Crisis - to which it owns a rather large debt.

Greg Capullo and Jonathan Glapion's artwork shines, but then Capullo in particular has been working with Snyder for almost a decade. They're clearly one of the best creative teams in superhero comics today, and if this is indeed their final collaboration they have set off on a real high. (4/5)

Under the cut: reviews of The Crow: Memento Mori, Detective Comics, Saga, and The Terrifics.

James O'Barr's popular comic book series The Crow gets a fresh spin-off - there have been numerous others - only this time it's an Italian edition, with a Rome setting and an Italian creative team. This one boasts great artwork - rich in atmosphere and with a strong sense of motion - with a fairly rote storyline. The problem with The Crow is that the format is too restrictive to do that much with it. We have another dead victim, risen from the dead to avenge the death of his girlfriend. This one takes on a contemporary angle of terrorism and religion, but it still feels a little ordinary. A short back-up serial by Matteo Scalera looks tremendous, but is ultimately too short to make an impact. (3/5)

Tim Drake gets a further glimpse into the future, forcing him to act now to prevent a terrible crime from being committed in the years to come. His information, however, is coming from a dubious source - and it seems likely that instead of preventing Batman's death he may be ensuring it. The "Batmen Eternal" arc continues with rising stakes and a very strong sense of finale after two years of James Tynion IV running the book. The artwork is good, as is the colouring, but really it's the story driving the book at this point - just how catastrophic are things going to get? (4/5)

It is always a commendable achievement for an independent comic book to hit 50 issues, and so congratulations are due to Vaughn and Staples for hitting this milestone with such apparent ease. You would be forgiven for thinking such a momentous issue would be matched by some kind of special storyline, but instead it's business as usual for the cast of interplanetary runaways and fugitives. Things progress, and as always look set to get worse for the protagonists before they get better. It's quality stuff, as Saga most often is. (4/5)

Okay, so let's just pass over how this comic is incorporating Alan Moore's Tom Strong into the DC Universe - which is something that is both unnecessary and mildly repellent in terms of creator rights. This is shaping up to be a really enjoyable team book, with a good set of characters (Mr Terrific, Metamorpho, Phantom Girl, and Plastic Man) and a pleasing use of the new status quo set up in Dark Nights: Metal. Jeff Lemire is using the characters very well, with solid dialogue, while Ivan Reis is producing top notch artwork to match. Of the current set of new DC monthlies, this was the only one that really seemed to show potential - and thus far it's fulfilling it ably. (4/5)
Posted by Grant at 12:58 PM