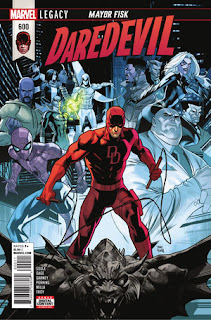 In the concluding part of "Mayor Fisk", New York City mayor Wilson Fisk prepares to sell the entire city to its criminal underground - unless Daredevil and an assembled group of local superheroes can intervene. Meanwhile, Blindspot finally confronts Muse, the deranged super-villain that cost him his eyesight.

And, of course, things do not go according to plan. This extra-length climax swings left just when the readers expect it to head right, leaving this celebratory 600th issue at a genuinely surprising cliffhanger ending and a wonderfully open sense that almost anything can happen to Daredevil and the Kingpin in the issues to come. It's a well-paced and dramatic finale. Ron Garney and Matt Milla's artwork and colours are bold and impactful. There is also a nice little back-up strip at the issue's end, by writer Christos Gage and artist Mike Perkins that acts as a small ode to long-running sidekick Foggy Nelson.

It's impressive when a comic book hits a milestone as massive as 600 issues, and for a character as strong and effective as Daredevil it is well-deserved. Now there's the wait to see what happens next - and to find out how many issues before Marvel reset the numbering all over again. (4/5)

Jim Gordon is the worst detective in the world. I only make this assumption because this latest issue of Batgirl once again puts him in a room with Batgirl - his own daughter Barbara - and he still does not recognise her. He even notes how much one reminds him of the other. I know this is an old problem, and I know that it's common across a lot of superhero books, but in this specific case it never feels true to the characters. This aside, it's a nice done-in-one adventure for the Gordon family, with Scott Godlewski continuing to provide great and upbeat artwork. John Rauch's colouring perhaps a little too soft tonally, but works will with the inks. (4/5)

The origin of the new Rorschach is told in flashback, while in the present he remains locked in Arkham. A lot of feels a little too close to similar material run by Moore and Gibbons in the original Watchmen. As a sequel to that book, Doomsday Clock understandably has pushed echoes of the original throughout the previous three issues; this fourth installment feels like a step too far. As a book purported to smash together the Watchmen and DC Universe, this issue had precious little DC in it - although a plot thread from all the way back in DC Rebirth looks ready to be picked up again. (3/5)

Orm, also known as the Ocean Master, presents himself to Mera with an intention to join the Atlantean Civil War. When he discovers that she has been crowned its ruler-in-exile, he instead comes to blows. Good without being great, Mera: Queen of Atlantis feels very much like a by-the-numbers DC Universe miniseries. It gives a great supporting character some much-deserved exposure, but the story and art feel too throwaway and inconsequential to be fully worth the effort. It's a fun read for Aquaman fans, but hardly essentially. (3/5)

Aphra is on a mission, against her will, to steal back the memory files of her droid master Triple-Zero from a top secret Imperial base. To break in, she has kidnapped legendary rebel Hera Syndulla. Now the return of her arch-enemy and rapidly developing love interest Magna Tolvan has thrown her entire strategy into the air. Smart, humorous writing, solid art and colours, and a bunch of characters and aliens from the Star Wars toy chest make this yet another satisfying issue. I will wait ten years for my Doctor Aphra feature film if I have to. (4/5)