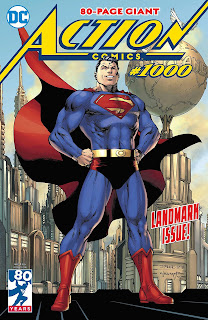 1,000 issues is a pretty big deal for any publication. Action Comics finally crosses that threshold this month, the first of America's superhero comics to do so, and in celebration DC Comics has made the issue an 80-page anthology celebration.

Sure it is more expensive than a normal issue, but it is also a veritable "who's who" of Superman writers and artists, each presenting short but effective stories. Collectively they really nail precisely why Superman is such a great character. Dan Jurgens and Norm Rapmund present a series of testimonies over why Superman is such a hero. Patrick Gleason and Peter J. Tomasi use splashes pages to make a speed run through Superman's 80-year career. Marv Wolfman resurrects an old Curt Swan strip to moderate effect.

Two of the most effective strips come from Geoff Johns, Richard Donner and Olivier Coipel - telling the story of the famous Superman-catching-a-car image - and Tom King and Clay Mann - really pushing the moniker "man of tomorrow" to a certain extreme. The issue ends with a short prologue for Brian Michael Bendis' forthcoming run on the Superman books: it looks intriguing, but there's honestly only enough there to grab the reader's attention.

Altogther it's a welcome and charming salute to DC's original superhero. Fans should find plenty to enjoy here - plus the wide range of alternate covers are wonderful. (4/5)

Under the cut: reviews of Batman, Ms Marvel, and Star Wars: Poe Dameron.

What do you buy as a present for a billionaire friend who's getting married? What if you have time travel technology? What if you have time travel technology and you're a complete idiot? For Booster Gold your gift is going back in time, saving Bruce Wayne's parents, returning to the present and finding Gotham City a crumbling war-zone with a homicidal Batman, gangs of Jokers roaming the streets and Bruce Wayne a vain, self-satisfied elite living in the lap of luxury. Oops. Assuming you can step over one massive caveat - the story really makes Booster an out-and-out idiot - this is a great opening to what could be a really fun parallel universe storyline. Tony Daniel is back illustrating Batman, and it all looks great. (4/5)

With Kamala back in Jersey with her friends, and the latest crisis averted, Ms Marvel takes an issue out to just tell a nice little 20-page teen drama. The character work is wonderful, Leon's artwork engaging and upbeat, and all up it's just a nice interlude in the company of some very pleasant characters. It's also the story of Kamala's first kiss, which is handled supremely well. I really like these sorts of small-scale breathers, and G. Willow Wilson writes them excellently. (4/5)

With the narrative of the comics now caught up with The Force Awakens, the Poe Dameron comic - rather than wrap up at issue #25 as I'd assumed - keeps driving through to show what happened to Poe during all the times he was off-screen in the movie. Technically I think this is the first piece of Star Wars fiction set after The Last Jedi, since this adventure is being told in flashback between Poe, Rey and Finn. So many on-screen characters give Angel Unzueta an unfortunate temptation to photo-reference the art to pieces - particularly in the post-Last Jedi segments. The big problem with this issue is that it's simply telling a story we don't ever need to see. It feels weirdly redundant. (2/5)
Posted by Grant at 9:51 AM