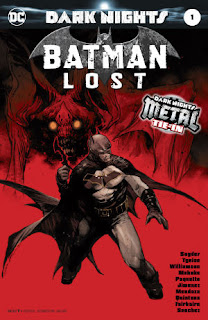 If you ever wanted a demonstration of how much Grant Morrison influenced the DC Universe over the past 20 years, then Dark Nights: Batman Lost is a perfect place to start. This one-shot, which ties in directly to Scott Snyder's six-part Metal miniseries, positively screams the name "Morrison" from every panel. It is difficult to imagine it being published at all had Morrison not laid out the groundwork in advance.

Some years ago Batman was struck by Darkseid's omega beams, throwing him all the way back to the dawn of the human race (see Morrison's Final Crisis and Batman: The Return of Bruce Wayne). There he attracted the attention of Barbatos, a dark god that exists in the 'dark multiverse', which exists on the flipside to the main DC multiverse. Across thousands of years Barbatos has manipulated the entire human race in order to bring the 21st century Batman to a specific act in a specific place and time, and the gateway to the dark multiverse has been opened. While Earth falls to the power of Barbatos' Dark Knights, Batman is trapped in a nightmare world of illusions and cannot get out.

This is essentially an interlude to Metal, in which Batman struggles to escape the dreamlike environs into which Barbatos has placed him. It is a love letter: to Batman's seven-decade history, to Grant Morrison's unique style of comic book storytelling, and ultimately to DC Comics itself. It is tremendous fun, with a deliberately shifting art style and a wealth of clever comic book references. I imagine it might be hard to fully enjoy this issue without reading Metal, but in context and with an informed reader, it is one of the very best comic books I've read this year. (5/5)

Under the cut: reviews of Action Comics, Detective Comics, and Mister Miracle.

Readers of Batman or The Flash may remember the four-issue arc "The Button", which crossed over between the two books earlier this year. It promised to be a follow-up to the DC Rebirth special, but instead pushed the story forward a little further towards Geoff John's now-imminent Doomsday Clock maxi-series. Action Comics is now at the climactic issue of its "The Oz Effect" storyline, and essentially the same thing has happened: no real ending or answers, just an arrow pointing to the next event as if everything hasn't been a bit anti-climactic and wasteful. It's a problem made worse by what actually happened in "The Oz Effect": Superman's own father Jor-El, magically back from the dead and turned into a cheap super-villain. It's a poor way to promote the next company event, no matter how good the artwork. (2/5)

A corrupted future version of Tim Drake has come back in time to murder Batwoman before she destroys everyone's future, and only the present-day Tim has a chance of stopping him. This is a much more effective climax: it actually provides a satisfying conclusion while still managing to point towards future story arcs in an inviting and provocative manner. Tynion has an outstanding handle on his characters here, and that is allowing the ongoing narrative to really feel personal and impactful. It is particularly good to get the younger Tim Drake back into the storyline after his recent incarceration in Jor-El's inter-dimensional prison. (4/5)

Orion suspects Scott Free of being a traitor to Darkseid, and forces him to stand trial at the location of his choice: Scott and Barda's living room. Most of this issue is one conversation but, as readers of King and Gerads' The Sheriff of Babylon will attest, this is often when they do their very best work. This is a smart, oppressive and increasingly paranoid work that manages to step inside the mind of a man having an emotional breakdown. Post-traumatic stress, depression, anxiety - it is all represented perfectly between the writing and the art - even the lettering. I have no idea where it is all going, but it is a rivetting mystery. (5/5)