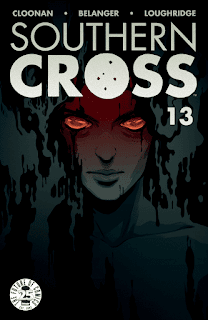 Science fiction horror series Southern Cross is back for a third story arc, and it is a very welcome return indeed. For the past 12 issues writer Becky Cloonan, artist Andy Belanger and colourist Lee Loughridge have developed a gripping and claustrophobic story that started with a murder and has no reached the exploration of a missing spacecraft that has just returned from somewhere outside of our own reality.

Set your expectations to Event Horizon and you'll have a ball with this series, which combines science fiction and horror with a strong cast of hard-edged, cynical characters. Andy Belanger's artwork uses slightly grotesque designs and a thick inking style to make it all look very stark and brutal. Lee Loughridge's limited colour palette tones everything down and gives it a very consistent and desolate aesthetic.

The biggest strength of all is the unpredictable storyline. Each arc has taken off in an unexpected direction, and this third volume seems set to do the same. Things have moved much faster than I expected them to here, from the opening - which pretty much picks up the exact moment the second volume ended - to the violent climax. (4/5)

Under the cut: reviews of Action Comics, Daredevil and Rebels.

Superman fights to end the genocidal crisis in Logamba, while at the Fortress of Solitude Jor-El gets inside Jonathan's head. I am still not onboard the whole concept of Jor-El surviving the destruction of Krypton and becoming the villainous Mr Oz who has been lurking in the Superman comics for the past few years, but putting my misgivings aside this is developing into a solid and entertaining storyline - and an obvious prologue to the Doomsday Clock maxi-series kicking off in a few weeks. (3/5)

Daredevil came to China to rescue his missing sidekick Blindspot, only to find Blindspot working for the Hand ninja clan and selling off Daredevil's soul to save his own mother. This final issue wraps the storyline up beautifully, tying together two years of story between the two characters and finding room for a beautifully observed epilogue as well. Next month Daredevil switches to new numbering - Marvel are adding up the total number of issues of each series and pretending their regular relaunches never happened - and an all-new storyline. For the one that's just wrapped up, this is the best possible conclusion. Great writing, atmospheric art and bold colouring; one two-page splash is a masterpiece of emotional expression. (5/5)

In the final issue of this volume of Rebels, it is 1775: Ethan Allen and Seth Warner travel to Philadelphia to meet John Adams to argue for Vermont's militia to join the growing continental army. It is a beautifully self-contained slice of early United States history, with strong characters established in a remarkably brief span of pages. Joan Urgell's artwork is excellent, and greatly enhanced by Lauren Affe's deliberately subdued and subtle colours. I really hope Wood has a third volume coming soon, because this is a truly excellent comic book. (4/5)
Posted by Grant at 9:04 AM