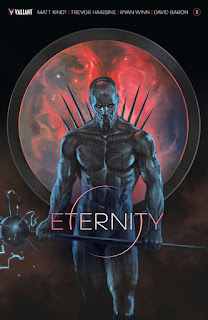 Abram Adams was a cosmonaut who was sent into deep space, where an unexplained encounter transformed him into the enormously powerful cosmic entity known as Divinity. Now, after three great miniseries, the character is heading back out into void in this new four-issue event from the Divinity creative team of Matt Kindt and Trevor Hairsine.

It is a strong opening, one that both reminds the readers of Divinity's origins and current situation as well as set this new story in motion. The alien sequences are easily the best, showcasing a wonderfully 'out there' imagination of strange characters, names and settings.

The visuals definitely sit on a shelf next to the likes of Jack Kirby and Moebius, but there is a much more direct and realistic aesthetic to it. All in all it is an intriguing hook into what looks to be yet another excellent Valiant miniseries. (4/5)

Under the cut: reviews of Detective Comics, Doctor Who: The 11th Doctor, and Silver Surfer.

Tim Drake has made it back to Earth after months of captivity, but so has a future Tim whose entire life has been devastated by assuming the role of Batman. Future Tim's only solution to erase his own timeline is to kill Batwoman before she sets the future into motion - only there is an entire Bat-team standing in his way. This is a great issue, playing off of a year and a half of continuity developments and character work. The special team Batman has assembled in this volume of Detective Comics finally comes into its own, and feels like a genuine special event. There's a great pay-off every few pages, all leading up to a cliffhanger that will thrill long-time readers of the DC Universe. (5/5)

The Doctor has discovered a Time Lord child living on the planet Zoline, whose technology level has progressed so fast that centuries of development have taken mere decades. The conclusion of this two-part storyline is clever, elegantly developed, and hugely satisfying. It ties in with TV series continuity in a wonderful way too, providing extra links for the dedicated fans but never getting in the way of this current story. I.N.J. Culbard's artwork is nicely simple and engaging too. After a slightly rough start, this third volume of the 11th Doctor's adventures is just getting better and better. (4/5)

Some 30 issues ago Dan Slott and Michael and Laura Allred started work on a new iteration of Marvel's Silver Surfer, essentially copying a lot of the character dynamics of 21st century Doctor Who: a mysterious alien traveller moving through the universe righting wrongs, accompanied in a breathlessly romantic fashion by a regular human woman. Slott's openly weird, whimsical storylines have been a perfect match for Michael Allred's famously retro artwork, and despite regular delays in productions Marvel left the creative team largely alone. Issues were released when they were ready, and as a result Silver Surfer has gone 30 issues in a row without ever requiring a fill-in writer or artist. Now, as all things do, it comes to an end in a manner that is simultaneously happy and sad. Or victorious and tragic. It is a pitch-perfect epilogue, and caps one of the best Marvel runs of recent years. (5/5)
Posted by Grant at 10:33 AM