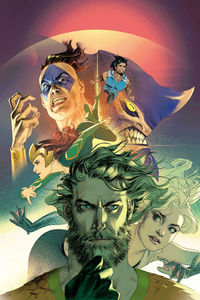 For a lot of people Aquaman is a kind of silly punchline: the ridiculous superhero from that old cartoon Super Friends who wore orange and green and talked to fish. For DC Comics fans he's often something more, but in the grand scheme of things not that many actually care about the character enough to read his comic.

They should. You should. Right now Aquaman the comic is about as good as it has ever been. Under writer Dan Abnett it has evolved into a long-running, character-focused epic. Arthur Curry, the rightful king of Atlantis, hides in his city's bottom slums while the tyrant Corum Rath rules in his place. Above the surface his fiancee Mera fights desperately to locate a way into the city. It is one big undersea fantasy, with long-term consequences and great character-based pay-offs. This particular arc is illustrated by Stjepan Sejic, one of the finest comic book artists working today.

This issue brings the current arc right up to a climactic point, and it feels like it's going to be character-defining one. This is a sensational run on a hugely underrated character. (5/5)

Under the cut: reviews of Batman, Doctor Who: The Twelfth Doctor, and Superman.

Selina Kyle has accepted Bruce Wayne's proposal, and now all that is left is to break it to the world that Batman and Catwoman are to marry. This is an exceptionally well-crafted issue. On one side, Bruce and Selina make their way in secret to an isolated Middle Eastern nation to meet with an unknown foe. On the other, Alfred takes it upon himself to warn the sidekicks - Dick, Jason, Duke and Damian - of the new state of affairs. Neither story runs smoothly. Joelle Jones' artwork is fabulous, crafting an immediately recognisable but distinct look for each of the characters. I really hope she sticks around on the book for a while; her artwork is exceptional. (5/5)

Doctor Who: The Twelfth Doctor #8

At last, a follow-up to the very first issue of Titan's The Lost Dimension crossover. In Bristol, the Doctor, Bill and Nardole team up with Jenny to fight whatever phenomenon is taking over human beings and turning them into zombies chanting the name “Doctor” over and over. This feels like a huge build-up, tying together not one but three earlier issues and finally providing The Lost Dimension with the focus that it requires. There are more than a few surprise appearances here, and each one brings with it a ‘punch-in-the-air’ moment of excitement. Rachael Stott and Marcelo Salaza’s artwork is excellent. Each character looks just like the actor who plays them on television, without ever seeming overtly photo-referenced. It all plays right into George Mann’s script, so that when you turn the page to see a character revealed it has the best possible impact. With two issues to go, The Lost Dimension is well set up for a killer finish. (4/5)

Lex Luthor's rise to become ruler of Apokalips in Darkseid's place was foreshadowed some time ago; now it seems that his ascension may be about to happen. Just as Luthor and Superman appear to be working together well as joint defenders of Metropolis, off-world forces kidnap him leaving Superman and Superboy to follow the trail. It's a strong opening chapter for "Imperius Lex", one boasting Doug Mahnke's typically excellent pencils and a strong blockbuster-style script by returning writers Peter J. Tomasi and Patrick Gleason. (4/5)
Posted by Grant at 1:11 PM