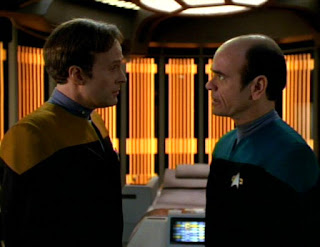 It is 11 September 1995, and time for another episode of Star Trek: Voyager.

The Doctor (Robert Picardo) is activated in Voyager's sickbay, only to discover the entire ship has been abandoned. After discovering both Janeway (Kate Mulgrew) and Torres (Roxann Dawson) are still onboard, the Doctor then discovers the Starfleet engineer Reginald Barclay (Dwight Schultz) who drops a bombshell: the Doctor is not onboard Voyager, but is in fact hologram designer Lewis Zimmerman inside a holodeck simulation that cannot be deactivated.

"Projections" hits off with a fairly dramatic hook: that we're not on Voyager back somewhere all the way back near Earth (Jupiter Station, to be precise). The problem is that before we even get to the central mystery - is he the Doctor or Zimmerman - the episode has included scenes that make the Barclay/Zimmerman scenario fundamentally impossible. The result is thus a fairly tedious wait for an extra 25 minutes for the Doctor's actual situation to be resolved. Thanks to poor scripting by writer Brannon Braga, the entire episode becomes a waste of time.

It doesn't fail for lack of trying. Robert Picardo gives his all - as he always does - and through a pseudo-flashback to the events of the series premiere "Caretaker" he is able to demonstrate just how far his character has developed. Dwight Schultz is immediately engaging as Lt Barclay, despite the fairly weak excuse the episode presents to include him. The remainder of the series' regular cast barely get a look-in, although maddeningly still finds time to make the actually rather talented Ethan Phillips play out another tedious 'comedy' scene as Neelix.

Jonathan Frakes directs the episode well, with a good visual eye - particularly considering the tight production schedule - but he is fighting an unwinnable war. Braga's script simply does not work. Even putting aside his spoiling the ending as soon as the episode begins, it somehow still manages to be a dreadfully predictable exercise with as close as one can get to an 'it was all a dream' conclusion without actually having the Doctor wake up from a dream.

"Projections" really is not worth sitting through for any viewers other than completists. After the terrible "The 37s" and the pretty average "Initiations", it leaves Season 2 of Star Trek: Voyager with just one relatively enjoyable episode out of three - or a quality ratio of 33 per cent.
Posted by Grant at 9:39 PM