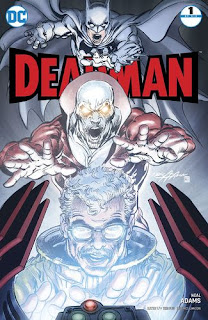 I couldn't honestly tell you why, but I have an enormous soft spot for Deadman, aka Boston Brand: a circus acrobat who was resurrected upon his death as a roaming spirit capable of possessing bodies and fighting crimes. DC recently gave him a miniseries in the form of Dark Mansion of Forbidden Love, which was a lot of fun, and now they're back with a new six-issue run simply titled Deadman. In this first issue, Deadman and Batman meet one another when Hook - the assassin who originally murdered Boston - sets up an attempt to kill Gotham's Commissioner Gordon at a nuclear power plant.

The story is genuinely messy, and regularly mystifying. For some reason Gordon is now acting as a US ambassador, and why he's assumed the role and why he's inspecting a nuclear plant both go unanswered. The artwork, however, is wonderfully old-fashioned and enjoyable to view, and will be the book's main selling point. Deadman is, after all, a book written and illustrated by legendary DC artist Neal Adams. Anybody with a sense of history and a love for DC's 1970s titles will get a lot out of this new series.

Overall it's a head-scratcher, but in the moment it's a wonderful throwback to the fast-paced, chummy books of my childhood. I'm a huge fan of Adams' artwork, and his talented have not abandoned him with age. Is it perfect? Not at all, but it is hugely fun to read. (4/5)

Batman and Catwoman head into a forbidden desert city, where they must fight off a horde of assassins working for Talia al Ghul. It's a strong issue. For one thing the newly engaged Bat and Cat play off one another beautifully, giving a sense of fun to Batman that very rarely appears in his various comic books. There is also a revelation as to what they're actually doing in the middle of the desert, which in the best story reveal tradition is both surprising and slap-your-head obvious. There's even a wonderful mid-issue conversation between Robin, Nightwing and Superman. Joelle Jones' artwork is still excellent and distinctive. (4/5)

With the lease on their house up for renewal, Daisy, Esther and Susan may be facing a big life change as they approach their third year at university. The last six issues or so have really slipped into a heavily serialised soap opera - albeit an immensely entertaining one - and there is a part of a me that misses the more overtly comedic tone of earlier issues. It's still beautifully observed, however, and Sarin and Fleming's cartoon-like art captures the essence of the characters in a wonderful fashion. Whitney Cogar's colours also keep things bright and engaging. (4/5)

Oliver Queen's mother Moira has returned from the dead. Merlyn is back on the scene after being saved by John Diggle. The Ninth Circle still rules Star City with no end in sight. On top of everything else, Oliver still has to face trial for the murder of a woman he knows is still alive - but for her safety he can't tell anybody. Writer Benjamin Percy continues to juggle a lot of narrative balls in Green Arrow, and seeing all of these story threads develop and interwine is half the joy of reading this book. Artist Stephen Byrne is doing an excellent job as well, keeping the book's general aesthetic will finding room to express his own style on top of it. (4/5)

The great Marvel re-numbering begins, with the publisher running a line-wide Legacy soft relaunch by adding up the issue numbers of all previous iterations of each title and starting new storylines from whatever issue number that is. So, in this case, all of the various incarnations of Ultimate Spider-Man add up (including this issue) to 234. The story, however, simply keeps going from the last volume of Spider-Man. Miles is undecided over whether or not he wants to continue being Spider-Man, while elsewhere a mysterious figure sets up an all-new Sinister Six. It's great stuff, but given Bendis' recent defection to DC Comics I wonder if he's going to manage to tie everything up by the time he leaves. (4/5)

Nezumi the thief escapes from the police and Usagi, only to get framed for murder. With a local criminal gang set to break out into internal warfare, and a local master of the silver mint possibly corrupt, there's a lot for Usagi and police inspector Ishida to investigate. This is the first chapter of a three-part story, and Stan Sakai has already set up a lot of story to work through. His art is excellent, as always, as is his characterisation and gentle sense of humour. It is so easy to take this book for granted because its style and tone are so perfectly and consistently presented, but it is absolutely a must-read for any comics enthusiast. (4/5)
Posted by Grant at 9:00 AM