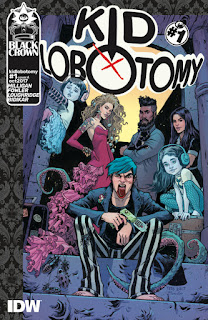 Editor Shelly Bond was one of the most critical and successful editors at DC Vertigo, the imprint where she worked from its second month of publication all the way through to April 2016 when DC Comics made her redundant as part of a company restructure. Now she's back, thanks to IDW Publishing, with a new imprint called Black Crown and a new monthly comic by Peter Milligan and Tess Fowler: Kid Lobotomy.

Sadly, as an imprint-launching comic, it is a messy disappointment. The story feels haphazard and unfocused. The characters feel derivative and uninteresting. All in all it feels as if writer Peter Milligan is running on automatic: this reads like a photocopy of much of his earlier, much better work. Tess Fowler's artwork is good, but artwork alone can rarely save a comic book.

It's ultimately a big disappointment, because Bond had a huge opportunity here to set up something truly dynamic, original and provocative - and instead she's edited together something that just feels like a by-the-numbers Vertigo copy. It's a terrible shame. (2/5)

Under the cut: reviews of Batwoman, Behind You, Kill the Minotaur, Spy Seal, and The Wild Storm.

Batwoman spends the majority of this issue in a Scarecrow-designed drug hallucination, which if I'm to be honest hardly ever makes for interesting reading. It tells us nothing we as readers did not already know, and simply eats up the page count. When the plot actually does move forward, it has hardly any room to do anything in depth. There's potential in this current storyline, but Marguerite Bennett's script is - so far at least - failing to capitalise on that potential. (2/5)

Behind You: One-Shot Horror Stories

This one is a real change of pace: a 180-page collected edition, with an introduction by horror author Joe Hill, containing a string of outstanding short horror pieces - each consisting of a one-sentence description and a single illustration. It's wonderfully off-kilter stuff, and absolutely beautifully packaged together. If anything they most remind me of a dreadfully askew version of New Yorker cartoons. The stories were originally presented on Coldrick's Tumblr, but they are much easier to appreciate and enjoy in their own collection. They can be savoured a few at a time, to allow each panel to maintain its own creepy impact. Read altogether and they do become a little bit samey. (4/5)

Kill the Minotaur has been one weird miniseries: beginning as a dark mythic fantasy before transitioning into horror and then - rather unexpectedly - science fiction. This penultimate issue combines elements of all three genres as Theseus and Ariadne attempt to kill the Minotaur once and for all. One sequence, at the climax of this issue, is a brilliant and artful series of parallel images, and is far and away the best imagery from the entire series. It suggests that, while this series has been a little patchy, the creative team may be one to watch closely on future projects. (4/5)

I am somewhat on the fence with Spy Seal. In visual terms Rich Tommaso has created a neat little blend of James Bond spy adventure and pastel-shaded European bandes-dessinee. It reminds me quite a lot of writer/artist Lewis Trondheim with its use of anthropomorphic animals (the protagonist really is a walking, talking seal who is an international spy). Sadly the tone of Tommaso's script feels a lot more British with it's "ooh-er" approach to romance and sex, and tonally the words simply don't quite match the pictures. It is entertaining me, but I think there was a much stronger and enjoyable book to be made here. (3/5)

An issue for explanations and introductions, as the Doctor gets to meet old Wildstorm favourite Jenny Sparks, and Marlowe explains his origins - sort of - to Angie Spica. The dialogue is great, and Jon Davis-Hunt's artwork continues to be some of those impressive that DC is currently publishing. It is still all a bit messy, however, and I continue to suspect that The Wild Storm is going to read much, much better in trade paperback form than in individual monthly issues. (4/5)
Posted by Grant at 9:59 AM