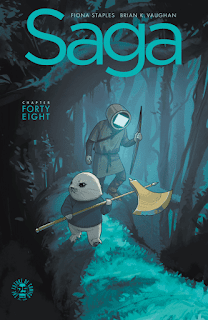 At this stage we all know the drill: another six issues have passed, bringing a story arc of Fiona Staples and Brian K. Vaughan's Saga to a close. There is going to be tugging on heartstrings, a shock conclusion, perhaps a violent character death - it's become something of a routine.

That's where Saga #48 comes as a total surprise. Readers expecting to see some terrible tragedy befall Alana, Marko and their daughter will be shocked to find themselves back with the anthropomorphic seal Ghus, the young robot prince Squire, and the journalists Upsher and Doff. They are stranded on a remote planet with no hope of rescue and a rapidly shrinking supply of food. To avoid killing Ghus' beloved walrus, he and the young prince set off into the forest to kill an invisible monster for its meat.

It is not only a refreshing change from the trials of Alana and Marko, it is also a refreshing change in tone. This issue has a beautiful fairy-tale quality that makes it stand out. The characters are sweet and pleasant to read about, and Fiona Staples' art is - as always - wonderful to look at. Saga may go up and down from arc to arc, but now and then it really knocks an issue out of the park. I thought this one was fantastic. (5/5)

Under the cut: reviews of Captain Kronos: Vampire Hunter, Copperhead, The Power of the Dark Crystal, Star Trek: Boldly Go, and X-O Manowar.

Yet another licensed title that demonstrates that the expectations of low quality from a tie-in comic book is becoming increasingly inaccurate. Based on a half-forgotten Hammer Studios horror film from 1974, it already had all the ingredients for a pulp period adventure book, but then Titan went and hired Dan Abnett as writer and the amazing Tom Mandrake as artist. The end results are pretty much the best adaptation of Captain Kronos you could want - and also stands well enough alone to appeal to anybody wanting a good old-fashioned vampire-hunting adventure. The articles at the back end on the making of the original film are just icing on the cake. (5/5)

Sheriff Clara Bronson is missing from the scene of a violent altercation. The mayor's murderer is still somewhere out there, and local criminal forces are preparing to set their own plans in motion. Former deputy turned replacement mayor Boo is struggling to hold everything together. Copperhead started really strong, but after a hiatus and a change of artist it feels like it's had the wind punched out of it. Momentum died during the delay, and it honestly feels like it's been a struggle for the book to get back on its feet. Things are heading in the right direction, but for now this book readable when it should be must-readable. (3/5)

The Power of the Dark Crystal #8

This issue is all action, as multiple plot threads all hit crisis point at the same time. With four issues left to go, all that's left now I suspect is climax and resolution. Protagonists Kensho and Thurma remain great, but it's a particularly great issue for Jen, who finally has his moment of clarity and once again becomes the noble-hearted and earnest person that he was in Henson and Oz's original film. The Matthews' artwork is excellent this month as well, but even that is nothing compared to that jaw-dropping cover by Mike Huddleston; the Chamberlain has never looked so good. (5/5)

This sequel series to the film Star Trek Beyond takes a surreal right turn this issue for a storyline set in yet another parallel universe, one in which Spock is an emotive hothead raised on Earth by his mother and Kirk is an eyepatch-wearing commander of a Klingon attack cruiser. It is reasonably well thought-out, and some readers might just enjoy the "what-if?" angle presented by writer Mike Johnson. Personally I found it a little silly, and once it got going just a little bit dull. This is usually a solid Star Trek adaptation, but with this issue I'm simply not feeling it. (2/5)

Aric has fought from slave to soldier to rebel leader - now all that is left is for him to challenge the Emperor himself. This epic science fantasy take on X-O Manowar has been hugely entertaining stuff, playing with archetypes and wrapping them around the popular Valiant Universe superhero in an incredibly natural and readable fashion. The artwork by Clayton Crain and Renato Guedes is painterly and atmospheric. Altogether it is a fantastic package, one that is familiar but also so effective that the familiarity works. (4/5)
Posted by Grant at 9:12 AM