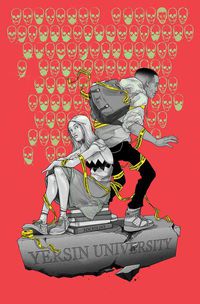 As a virulent virus spreads around the world, two first year college students begin their first day in a new dormitory. Lazaretto is a new five-issue miniseries from Clay McLeod Chapman and Jay Levang, that basically plays out a viral outbreak with its characters trapped inside a quarantine area.

This first issue is pretty much set-up of story and establishing characters, so it is a little difficult to fully judge the series at this stage. As a set-up it works perfectly well: we know the protagonists well enough, and we see them thrown into an extreme and potentially lethal situation. Is there enough to convince a reader to jump onboard for another four issues? That likely depends on how much that reader is willing to put their trust in the creative team I guess. I'm still on the fence.

I am also a little ambivalent about Jay Levang's artwork. The pencils and inks are rather scrappy and messy, I suspect intentionally so, and I am not sure it was the best visual style for the story that Chapman is attempting to tell. It looks a lot more like a fully independent kind of art style that you would usually see from a mid-level commercial publisher like Boom. I find myself very ambivalent about this book. It's good, but it's also not quite good enough. (3/5)

Under the cut: reviews of Batman, Captain Phasma, Doctor Who: The 11th Doctor, Seven to Eternity, Spider-Man and Star Wars Adventures.

It is odd that, in the middle of Tom King and Mikel Janin's epic "The War of Jokes and Riddles", that two of the most effective issues have been a side-story about Kiteman. He's a joke of a villain, and King has done a wonderful job of presenting the underlying tragedy of being such a joke. Clay and Seth Mann's artwork is great. Jordie Bellaire's colours are, as always, exceptional. I particularly like how King has taken the time to produce these side issues that give the whole arc an emotional resonance that the main issues don't have room to provide. (5/5)

So little happens in this first issue of a five-part miniseries that I almost feel compelled to complain about false trade practices. It's barely a comic book. Instead with a surfeit of splash pages and large panels we see how Phasma escaped from Starkiller Base at the end of The Force Awakens. It is a cash-in for the forthcoming film sequel The Last Jedi, but unless you're a completist you have no compelling reason to buy this comic. Every creative involved is capable of much better. Hard-core fans of the character - and let's be honest they're fans of the potential rather than what's been provided on-screen so far - will likely appreciate it. Everyone else should really consider staying away. (2/5)

This one got delayed in arriving at my local comic shop. The Doctor arrives at a planet that he has visited before - although the memories of his visit remain trapped inside his alien companion the Sapling. It seems the local population have advanced immeasurably in technology over the course of decades, and investigating leads to an unexpected new enemy. This is a big improvement over a lot of recent issues, although I'm still not enamoured with this third year's overall arc. I.N.J. Culbard's artwork is simple but effective. (3/5)

A few issues back we saw Adam Osidis abandon and betray his companions to rescue the Mud King. Now we finally get to catch up and find out why he did it, and where he and the King have gone. It is great to have Jerome Opena back delivering such outstanding artwork. This is without question to me one of the most gorgeous books on the market right now. It is also hugely satisfying to get further insight into Adam and why he made his choice. It leaves Seven to Eternity in a place where it's honestly difficult to ascertain if there are any proper heroes or villains in the story at all - I adore that. This is the last issue of the second arc, with a trade collection due soon: the perfect opportunity to catch up if you haven't been reading this hugely effective and emotive fantasy. (4/5)

With his parents fighting, his life in New York out of control, and not seeing the point of staying enrolled in school, Miles Morales ditches everything and flies to Tokyo. He immediately finds himself neck deep in fresh trouble of course, because that is now superhero comic books work, but it does feel a weirdly abrupt shift for the book. I go back and forth like a pendulum with this book. I am usually complaining that the plot is glacial, despite great character work. This month I am complaining that it's too sudden and rushed, despite great character work. I honestly worried I had somehow missed an issue. Surely there's a middle ground here? (3/5)

With Marvel already publishing several Star Wars titles a month, IDW now adds to the pile of with the all-ages anthology title Star Wars Adventures. This issue features two storylines by Doctor Who spin-off writer Cavan Scott: one about Rey prior to the events of The Force Awakens, and one flashing back to Obi-Wan Kenobi during the prequel era. They're nicely enough illustrated, albeit clearly aimed at kids with both a narrative and visual simplicity. Young comic readers with a love for Star Wars will probably love it to bits. Older readers looking for something more sophisticated are better off sticking with Marvel. For IDW this fits a solid niche. (3/5)
Posted by Grant at 3:51 PM