Star Trek: The Next Generation: "Parallels" 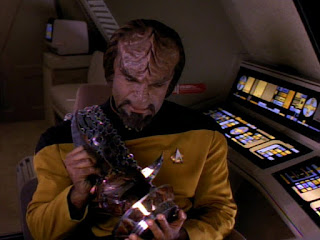 It is 29 November 1993, and time for another episode of Star Trek: The Next Generation.

Reality begins to shift around Lieutenant Worf (Michael Dorn). At first it is only small changes: a painting jumps from wall to wall, and the flavour of a birthday cake changes. Then bigger jumps occur: Worf finds himself in a world where Captain Picard (Patrick Stewart) has died, and then one where he and Counselor Troi (Marina Sirtis) are married. Is he losing his mind, or has something gone terrible wrong with reality?

"Parallels" is a deeply silly trip through a bunch of parallel universes, one packed with nonsensical technobabble, unexpected cameos (welcome back Wesley Crusher after almost two years), and 'what if?' fan-pleasing scenarios. Thankfully it is all anchored by Michael Dorn's spectacularly funny performance as Worf, whose deadpan delivery makes it all seem hugely entertaining.

The entertainment value of the episode stems from Worf's increasing befuddlement and panic as the world changes around him, and from the variations in continuity that the episode throws up. The most significant of these is the idea that he and Troi not only became husband and wife but had two children together. The relationship is built up over the course of the episode. In its early minutes Worf asks Troi to be his son Alexander's legal guardian should anything ever happen to Worf. Troi asks what that would make her in relation to Worf, to which he replies the closest non-Klingon equivalent would be step-sister. Troi notes that would make Lwaxana Troi Worf's step-mother. 'It's a risk I'm willing to take,' he replies, in one of Dorn's all-time best lines in the series.

From there reality jumps to a universe where Worf and Troi are dating, then when they're married, and finally to where they have kids (sadly unseen). There's a genuine tragedy at the end when Troi asks her husband what will happen to her when he returns to his own reality; Worf doesn't know, we the viewers never find out, but Troi's sorrow still feels very real and powerful.

The episode ends with Worf beginning to woo his own universe's Troi, which is an odd and unexpected development. A lot of fans hated the idea, seeing it as stepping in the way of the inevitable Troi-Riker reunion and not seeming particularly believable. I rather like it. It shows a more mature sense of romantic relationships where ex-lovers can still be friends and colleagues when one of them starts dating another co-worker. I also like it because it seems so unusual; it shows off a new angle to Worf that the series has previously denied him.

The other great parallel universe presented here is one where Picard died during "The Best of Both Worlds", Riker (Jonathan Frakes) is captain and Worf is first officer. Wesley Crusher (Wil Wheaton) has remained on the Enterprise and been promoted to Lieutenant. It is a glimpse into an alternate version of the series that would actually have been pretty entertaining to watch, despite the loss of Patrick Stewart as star.

Silly? Yes. Nonsensical and packed with technobabble? Absolutely. Despite this, "Parallels" is a hell of a lot of fun, and manages to push Worf forward in interesting ways. After 10 episodes of Season 7, this is the fifth good one - giving the season a quality ratio of 50 per cent.
Posted by Grant at 1:08 PM