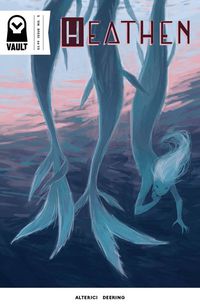 We're eight months through the year, and it's looking increasingly likely that my favourite book of 2017 is going to be Heathen. This independent book by writer/artist Natasha Alterici is just a wonderful read. The writing is striking and well characterised. The artwork is absolutely beautiful. As a combined package, with each issue coming in a beautiful matte finish cardstock cover, it's been a hard act to top.

Issue #5 sees Aldis setting out on her own again to secure passage north to the mysterious land of Heimdall. To do that she needs to convince the ship captain Makeda that it isn't a suicide mission, and that means one thing: mermaids.

The use of Norse mythology and fantasy creatures is beautifully done here, as is the very strong range of female characters throughout. Aldis herself was exiled from her own village for being a lesbian, and the book treats themes of female sexuality with heart and respect. Above all else this is simply a phenomenally readable book. It comes too slowly: at the end of every issue I desperately wish to read the next. (5/5)

Under the cut: reviews of Batgirl, Doctor Aphra, War Mother and X-O Manowar.

And to think I almost dropped this book when it relaunched. Batgirl kicks off into what looks like another great storyline as Batgirl and Nightwing team up to revisit a case they worked back when they were both only teenagers. The back-and-forth narrative structure works very well, and writer Hope Larson positively nails the characterisation of both an adult and teenage Barbara and Dick. Long-term fans of both characters will have a ball. Chris Wildgoose's artwork is simply but beautifully crafted. Even in the time he's been working on this book it's been getting better and better. (4/5)


Marvel. Written by Kieron Gillen. Art by Marc Laming and Will Sliney. Colours by Jordan Boyd.

The Doctor Aphra annual does precisely what I think comic book annuals should do: it takes a self-contained story that's not necessary to the main plot arc, but which illuminates it to a degree. In this case, the set-up for the auction currently underway in the monthly book is played out alongside flashbacks to the life story of the Wookiee mercenary Black Krrsantan. It's well paced and interesting, and a pretty solid match between the two artists. Like the best annuals: it's not a must-read, but it is a good read. (4/5)

Last year the science fiction miniseries 4001 AD was expanded with a series of associated one-shots, and one of those special issues has now been expanded into a four-issue series of its own. The people of the Grove - Earth's last depository of knowledge - are faced with the choice of staying where they are and dying, or searching for a new home under the leadership of War Mother and her sniper rifle. This is a great first issue, introducing the set-up and key characters in an efficient manner. There's a wonderful amount of world-building in the background as well. It's an excellent jumping-on point as well; no previous reading required. (4/5)

If Heathen is not my favourite book of 2017, I suspect it will be because X-O Manowar will have pipped it to the post. This relaunch of the long-running Valiant property has been astonishing, thanks to top-notch artwork and a science fiction setting that brings to mind the likes of A Princess of Mars and Marvel's hugely successful Planet Hulk. In issue #6, Aric assembles his closest companions to consider challenging the Emperor, whom he suspects of allying with the mysterious monoliths that are destroying their world. It's excellent science fiction action, with absolutely brilliant artwork by Doug Braithwaite. The first trade paperback was recently released, if you want to catch up. (4/5)
Posted by Grant at 9:30 AM