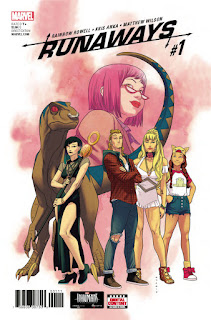 Runaways is a Marvel title about which I have heard a world of praise, and yet circumstance has resulted in me never actually reading the book myself. I figured I would correct that in a small part by sampling Marvel's new relaunch, which returns to a group of friends who bonded together when they discovered that their respective parents were all super-villains.

It's clear from the outset that this relaunch assumes prior knowledge of the characters, because while it explains the basics of the spell-caster Nico Minoru and the time-travelling Chase it never really pauses to properly re-introduce them. That put me at something of a disadvantage when reading issue #1: it tells a tense, very well written scene, but because I am not invested in its participants it does not have the intended effect. I suspect pre-existing fans will get a lot more value for money.

Kris Anka's artwork is reasonable, but it is lifted to a new level by Matthew Wilson's colours. This issue is a really good example of just how important and useful good colouring can be. (4/5)

Jennifer finally confronts Oliver, a YouTube celebrity chef whose body has been hideously mutated by a prank gone wrong. Stopping him in his monstrous state requires transforming herself - but in her newly enraged Hulk state can Jennifer control her actions? This wraps up the second story arc for Hulk. It is a little weaker than the first, but does still hit solid emotional beats of post-traumatic stress and grief. Lopez and Gaston's art is a little uneven for a mainstream title, but Tamaki's script shines through with some nice narration and character moments. (3/5)

Stanford Yu is a teenager who finds himself 'adopted' by a giant alien robot. When he enrols into a mech pilot training program, the well-connected cadet whose position he unintentionally supplanted sets out to make trouble. This is a really enjoyable, albeit somewhat predictable, giant robot story. Its origins in anime are worn openly on its sleeve, but both Greg Pak's strong, well characterised script and Takeshi Miyazawa's distinctive and warm artwork push this book to a level that more than compensates for any predictable elements. This was intended as a four-issue miniseries, but Boom have already confirmed that strong sales of the first issue have expanded this book to ongoing status. Based on this issue, it deserves it. (4/5)

Mister Miracle and his wife Barda are summoned back to New Genesis to fight for their new Highfather Orion. This is a beautifully composed and powerful book, told via a strict nine-panel Watchmen-style grid. The way in which King and Gerads work within that framework to tell a story that is bold, experimental, emotionally resonant and deeply creepy is just hugely impressive. The New Gods are a wonderful pantheon, and as this second issue opens up and uses more of them it really drives that home well. I don't think I have ever seen Granny Goodness written so well. (5/5)

The second issue of Rich Tommaso's European-styled spy adventure feels much more self-assured and consistent than the first, with a nicely consistent blend of humour and action. The presentation is absolutely wonderful, as are the relatively pastel-style colours and clean ink style - all of which contributes to that particularly sort of 'bandes-desinees' feel. The brisk plot and nicely composed action - there's a great car chase here - lift it up. Overall it's a vast improvement; my opinion of Spy Seal has shifted from on-the-fence to committed reader. Fingers crossed the quality is maintained for the rest of the storyline. (4/5)
Posted by Grant at 5:10 PM