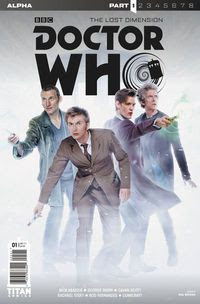 It is time for Titan's annual Doctor Who crossover. This year, instead of taking place as a separate miniseries, the crossover is going the regular title route. Following this opening chapter, the remainder is playing out across the monthly books for the Ninth, Tenth, Eleventh and Twelfth Doctors.

There is no rush to hunt those books down, however, because truth be told The Lost Dimension is off to a horrifying start. The script by George Mann and Cavan Scott seems less interested in telling a dramatic story and more interested in packing in as many continuity references and cameos as possible, from the obvious (UNIT shows up, as does Jack Harkness) to the remarkably obscure (a bowship from "State of Decay"). In between these jarring cameos are momentary flashes of humour and charm, but they're utterly buried.

Then there is the return of the Doctor's cloned 'daughter' Jenny, last seen on television flying off to have adventures of her own in 2009's "The Doctor's Daughter". She was a gratingly irritating character on screen, and she is no more entertaining in print. The book even shoe-horns a way for her to briefly meet Peter Davison's Fifth Doctor with a cry of 'Dad!'; actress Georgia Moffett, who played Jenny on TV, is Davison's actual daughter.

This is the very worst kind of tie-in fiction. It is the sort of comic that gives all comics based on TV shows and films a bad reputation. I strongly recommend giving The Lost Dimension a miss. (1/5)

Under the cut: reviews of Aquaman, Planetoid: Praxis and Saga.

While Aquaman and Dolphin find themselves imprisoned by Krush, Vulko receives help from a disgraced Widowhood Sister named Ondine. I honestly don't remember the last time Aquaman was this good. Dan Abnett has given the entire series a fresh style that blends fantasy and superheroics, thrown its protagonist into what feels like a genuinely fresh and bold direction, and is actively playing with a great and gradually expanding supporting cast. Stepjan Sejic's artwork gives the entire storyline an epic, blockbuster feel. This should be selling a lot more copies than it it; this is currently one of DC's best titles. (4/5)

The time has come for the planetoid's colonists to give up and leave, or to finally dig down once and for all and declare war against the corporate interests that have invaded their home. This is a surprising climax: it is told at a much lower key than I had expected, and unfolds with both grace and maturity. Character arcs are wrapped up, decisions are made, and it all winds down in a clever way that is both slightly unexpected and rather satisfying. It was a long wait between the first and second Planetoid series - almost five years - but my fingers are crossed that a third will come along sooner rather than later. (4/5)

Marco takes Alana to the Endwife, while back near their ship an unexpected new relationship blooms. Saga has always been a slightly confronting comic, mainly because Vaughan and Staples seem perversely delighted at occasional opportunities to cause a fuss. This issue feels particularly troublesome, dealing in a fairly lurid manner with late-term abortion. There is something about the manner in which the issue is treated that does not sit quite right. That is a shame, because there's a lot of really good character work and humour packed around other bits of the issue. (3/5)
Posted by Grant at 9:25 AM