Doctor Who: "The Lodger" 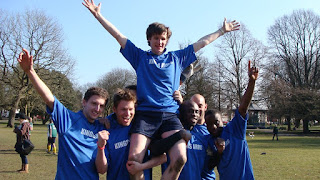 Amy (Karen Gillen) is trapped in the TARDIS after it ejects the Doctor (Matt Smith) and gets caught by an unexplained force. Stuck in modern-day Colchester, the Doctor is forced to rent a room and become the housemate of the unsuspecting Craig Owens (James Corden) until he can work out what it is that is preventing the TARDIS from landing.

"The Lodger" is a strange little episode of Doctor Who that largely sees the Doctor trapped in present-day England and forced to pretend to be a normal human being for several weeks. The episode does have a science fiction plot at its core, but it is almost an arbitrary one. The bulk of the episode consists of Matt Smith trying - and failing - to look and act ordinary and not arouse any suspicions. It is messy, but also likeable.

There is a central storyline about a mysterious stranger in an apartment upstairs and a string of people going missing, but as far as plots go it is about as light as one can feasibly make it. Even the climax is a bit of fluff created just to further the relationship of the two guest stars James Corden and Daisy Haggard (his best friend Sophie). The storyline does not even really get resolved so much as stopped, with an explanation shoe-horned in early into the following season. Hardly satisfactory.

That leaves the bulk of the episode's time to the Doctor's attempts to be normal, Craig's attempts to tolerate and understand his new houseguest, and a weird sort of mis-matched friendship buddy story. It works wonderfully. It plays on Matt Smith's strengths, not only as an actor but as a footballer. It gives James Corden a surprisingly dramatic - and romantic - part to play, which does so in an engaging and sympathetic manner. I was not a particular fan of Corden prior to "The Lodger", but he won me over here.

As a comedic buffer between the emotive "Vincent and the Doctor" and the climactic "The Pandorica Opens", "The Lodger" is both well placed and well played. It is far from essential viewing, but does pull off being a charming, small-scale and rather distinctive Doctor Who episode. There really hasn't been an episode like it, either before or since. 11 episodes into Season 5, and 10 of them have been good. The quality ratio is 91 per cent. 2010 really was one of the most enjoyable years that Doctor Who ever had.
Posted by Grant at 1:16 PM